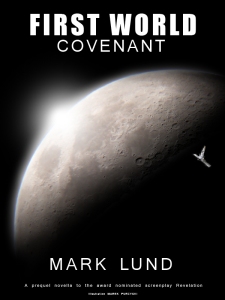 I am pleased to announce that First World: Covenant has been published. My first ebook went live on Amazon yesterday afternoon.

For those of you that may not be familiar with First World, the story is set in the year 2018 when China announces its first manned mission to the Moon which sets forth the unraveling of a worldwide cover-up that began when Apollo 11 discovered a domed installation in the Sea of Tranquility, and with it, the origins of mankind.

Covenant is a prequel novella that takes place twenty-four hours prior to the events in First World: Revelation. Covenant revolves around four characters that each have a stake in the coming of a new world order and provides some additional background to the primary story that starts in Revelation. The synopsis can be found on the Covenant page and in the official press release.

The First World story really began in 2006 with one scene. I just imagined being on the beach when suddenly these space-like ships appear out of nowhere. OK, now where did I want the story to go.

Ever since I can remember, I have loved science fiction. I’m particularly fond of the classics from the 1950’s. I have also been fascinated with the number of conspiracy theories surrounding the Apollo missions. It’s hard to believe that some people actually think we never went to the Moon. So then where did these Saturn V rockets go?

Another area of interest of mine has been the various religious beliefs that are held by most of the human population on this planet and the governments that, let’s face it, control the population.

When I started to “pen” First World one of my other goals was to ground the story in history and major events. You’ll see what I mean when you read Covenant.

Since 2006, First World: Revelation has placed in three writing contests at leading film festivals, been produced as a short film that has screened at twenty science fiction conventions in over six countries and is running on Hulu.com through the IndieFlix channel (Yes, I am working on securing production of the feature-length version). As I mention in the acknowledgments, the words Thank You don’t nearly express my gratitude for all those that have supported this…adventure!

I hope you enjoy Covenant.  I look forward to your comments.