In Gravity We Trust

In the First World universe the primary method of transportation by the Lunarians is the Arctran (Anti-gravity Robotic Command Transport Rapid Aeronautic Navigation). Styled like the retired Concorde, with the length of a 747 and in “Boeing Silver,” an Arctran’s primary function is to act as transportation between Central’s four Earth bases and the domed installation on the Moon, Lunaria. Of course no fictional story would

be complete without putting the Arctrans to the test of combat, something they were never designed to do – well, maybe they’ve had some modifications along the way.

Anti-gravity propulsion is certainly nothing new in science fiction. One of my favorite movies that used anti-gravity as a plot device was The First Men in the Moon (1964). The one thing that I love about science fiction from the 1950s and 60s is that they try to explain the science behind the science fiction. In The First Men in the Moon, a scientist by the name of Joseph Cavor invents Cavorite – a gravity blocking substance with the properties of Helium. When this substance is applied to an object it defies the laws of gravity and propels itself. In the film, Cavor uses Cavorite painted blinds on his spacecraft (a sphere) to navigate. Imagine if it was that simple

In the real world, the last seventy years has seen a variety of research into the 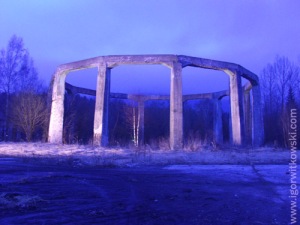 harnessing of anti-gravity technologies. During the Third Reich, Die Glocke was allegedly some sort of “Bell” that resisted gravity with electromagnetic propulsion. The only proof of whatever did actually exist is a test rig.

For years it has been speculated and reported that Boeing has been working on anti-gravity propulsion with the code name GRASP – Gravity Research for Advanced Space Propulsion. When we consider that the black technology computers used during the Apollo space program are now household technology, I think we can safely speculate that there are propulsion systems being tested that the public has yet to witness.

Next weekend I’ll be at the Rhode Island Air Show, maybe I’ll arrange for an Arctran to make an appearance. Better still, maybe our military would like to surprise us with something new.