The Board of Directors of Reincar Scientific await the verdict.

With our first poster currently in the design phase and having written the trailer this week, there is one group that needs to be thanked for their participation in Justice Is Mind—the over 50+ extras. Without their support, Justice would have resulted in a much “smaller” look for it was the extras that gave the film the scope it needed in the areas of the story that called for it most. 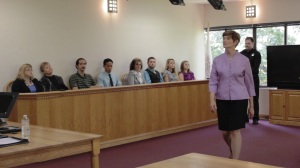 The jury during opening statements.

For actors working as an extra it can be both a rewarding and daunting experience.  There can be a lot of waiting around and in some cases (especially the studio level films) you may never actually be seen on camera. Sure, on the  studio films you are getting a day rate, but it’s not about the money it’s about the craft. On Justice I wanted the actors participating as extras to know that I endeavored to not only make sure they were seen on camera, but that their very participation was vital to the film.

Case in point the Board of Directors of Reincar Scientific. When I was updating the script, I added a few scenes that were intercut over the testimony of Dr. Eve Pullman, the inventor of the FVMRI procedure. Logically, the company that funded this process would be following the story intently. After posting for executive “extras” on New England Film and with the assistance of Carlyne Fournier who played Dr. Even Pullman, not only did we have enough members for the board—but it was standing room only!

Another example of actors coming together was in the courtroom scenes for both the jury and the audience. After another round of promotion to constitute a full jury, Mary Wexler, who plays Judge Wagner in Justice Is Mind, was just terrific. We were in the enviable position of having more actors than we needed for the jury. From the bench, Mary took the reins as a judge would to ask prospective jurors questions—in this case their availability for the days needed on set. For those extras that didn’t make it on the jury, their participation as extras in the courtroom audience was just as vital.

I would also like to take this occasion to mention Sheila Mandeville Grant who played the jury forewoman. Sheila and I went to school together in Spencer, MA and graduated the same year. She has been such a wonderful supporter of my projects over the years. In the case of Justice her daughter Kelly Grant and Kelly’s boyfriend Nicholas Boyle participated as jurors. The David Prouty High School (alright I’ll just age myself) class of 1983 was a big part of Justice Is Mind—Mary Wenninger (our financial backer with her husband Stefan) also graduated the same year.

From the wedding of Margaret Carpenter to Henri Miller, to the FVMRI Operations Center, the actors that participated in Justice Is Mind as extras brought an enthusiasm to their roles that increased the dimension of the story on a variety of levels.

This director sends you an “extra” thank you and for bringing “justice” to your part.