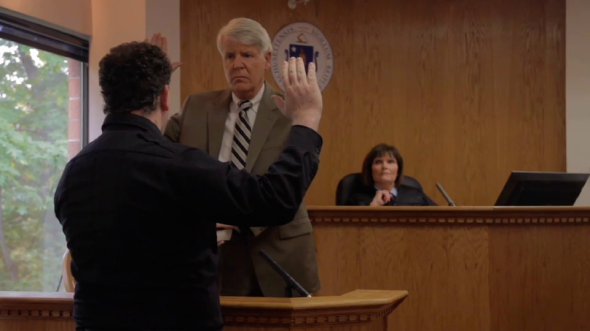 With the special effects for Justice Is Mind being completed this week, my attention has largely been focused over the last month on the sound design of the film. Yes, while the visuals of Justice are easy to share and enjoy, there is an entire area of the film that is just as important – sound. It’s not just the words that are being spoken it’s the atmosphere around them that defines the mood and feel of the film.

For anyone that has been involved in filmmaking, post-production is a managed process and sound design is part of it. Sure, you don’t have to have that beep on a cell phone, or electronic click of a computer, but I believe it’s that level of detail that sets films apart from each other. I’m also very into details and sound is part of that process. Is the judge’s hammer sound too soft? What tone do we set for this particular character? Sound wise how do we advance the drama and the story?

A film without sound design is like a painting. Sure, it can be visually arresting and you hope there is a compelling score, but have you ever noticed in a film that particular characters or moments have a similar sound? In Justice our primary character is Henri Miller and as the story builds so does the atmosphere around him.  Sometimes the sound is silent as the stage is being set for a dramatic build or moment in which you want the audience to pay attention and take notice. This is a process that is just as creative as the editing, score and special effects and just as time consuming. 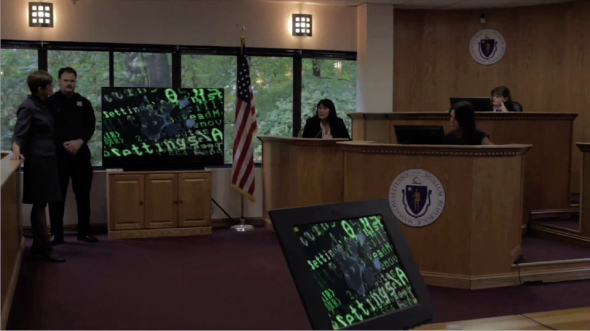 It is a curious process watching a script come to life. Sure, I directed it and have worked with our editor, special effects supervisor and composer (who is also doing sound design), but this is where you see the creative energy come to life and I haven’t even talked about sound mixing or color correction yet. I’ll save that for another post.

I often wonder if audiences really know what goes into a film from start to market. Personally I love the entire process, but to quote District Attorney Constance Smith, “I didn’t promise you an easy case.” Filmmaking is not easy by any stretch. The level of competition between films is fierce beyond words (just start to look at sales agents’ websites). If you don’t have A or B list actors to anchor your distribution, you better have a compelling story because that’s the only thing that will save you from achieving distribution. I like to think we have a compelling story with Justice. We already have digital distribution in place and our early interest from sales agents and distributors is extremely promising. I’ve sold them on the script, the trailer, clip and visuals, this is why all of us involved in post-production are being a bit manic about the details. Because in the end you have to have a commercial product. 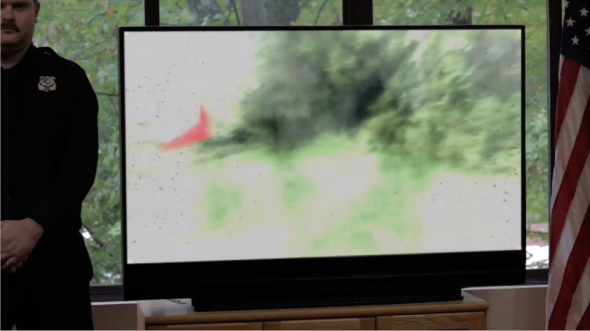 Henri Miller’s FVMRI process is played in court. But what are these “white out” periods?

I know some filmmakers that are not commercially minded and in fact have told me they aren’t producing such and such to make any money. Unless you are producing as a calling card for experience, short films are great for this like I did with First World and Evidence, I just don’t believe in vanity filmmaking. Point in fact there is just way too much that goes into creating a film in the first place.

Let me give you some facts. My legal team is in Los Angeles and they are working diligently with me on countless matters; our composer is just outside London, UK; we had a representative (my entertainment lawyer) at Cannes; our post production team is in Massachusetts and New Hampshire and we have, by my last count, just over 200 actors, crew, marketing, location and promotional partners involved in the film. Justice will not just have one big showing then off to a dusty shelf while I wait to hear from festivals. Dear god if that happened I would board one of my Arctrans from First World and quietly leave the planet! What it comes down to is promoting your project to as many people that will listen. Sales agents, distributors, theatre owners, conventions are, by design, used to getting pitches-it just comes down to a compelling story because they need to bring that story to their own audiences to, dare I say it, make money.

But like I did when publishing magazines, money cannot be the first thing on your mind, quality must be the first. For I believe that if a quality product is well presented it will find its audience and share of revenue.  It just comes down to doing one thing:

Turning up the volume. 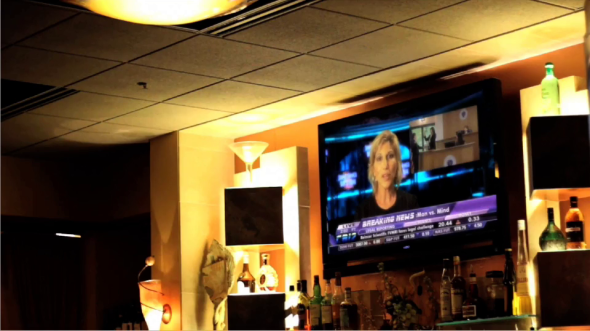 Running on mute, the trial plays on TV in Henri’s restaurant.