This opening shot in First World was created by the director for another program. As he owned the footage, he used it for this scene.

Writing an original story is by no means an easy process. There are times when I think and rethink various elements to make sure they flow. Does this transition from that transition make sense? Am I carrying the story forward and adding something with each moment? Even though I’m writing fiction, I always ask myself would people act and respond this way in “real life”?

But at one point it starts to click. For this story it happened around page twenty. While I have the general outline for act one, two and three (Yes, I believe in the three act structure), it’s the journey these characters take that will make the story what it is.

This shot of the FBI in Washington, D.C. for Serpentine has also been seen in Madam Secretary.

But one thing that is easy, is creating worlds that are larger than they appear or you have the budget for.  With every film I’ve produced (and some commercials), I always use stock footage. From the White House in First World, to Reincar Scientific in Justice Is Mind to the FBI in Serpentine, it’s a simple purchase from one of the stock footage houses.

Most stock footage is very affordable. However, there are times when it can get pricey. Case in point was footage from the Nuremberg Trials after World War II in Justice Is Mind. In addition to the footage, I also had to obtain it at a certain aspect ratio.  But in today’s modern world of filmmaking, it’s amazing what’s available if you just look for it.

As this story largely takes place in one room, it will be stock footage that takes us out of the scene to illustrate certain moments of the story.  Why ask the Department of Defense if you can film a B-2 taking off from Whiteman Air Force Base if you can just acquire the footage for $79.

In Justice Is Mind one of the characters is leaving Germany for the United States.

I remember after Justice Is Mind was released, I was asked by someone in the industry if I went to Logan International Airport in Boston to film planes taking off.  I remember jokingly responding that it was a real pain in the ass to get over all the fences and position myself with a cameraman at the end of the runway. I think they thought I was serious. Oh well.

As I dove back further in the First World story and archives, I came across a time in 2008 when certain funding commitments were imminent for the production of the film (it was going to be part of a slate of films with a particular producer). But then the global recession took hold and literally decimated the film industry (particularly on the independent side).  At the time it was disappointing, but everything happens for a reason.

It’s interesting how one is turned to a particular story. When the idea came to me during my moments at the Naval Justice School about developing a story in a one location environment, something drew me back to First World. Was it the military aspects of that story? The fact that I’ve already created these characters? Who knows, the one thing I never ask myself is why. I just write. 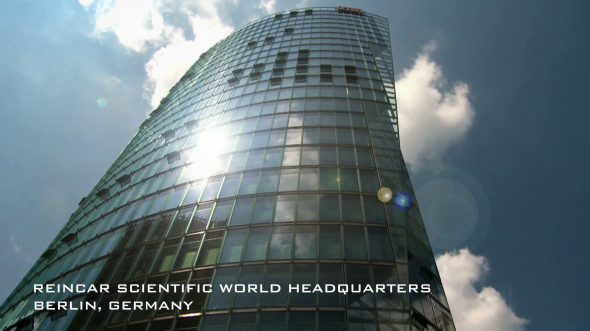 Although Reincar Scientific is a fictional company, this building actually exists in Berlin, Germany.