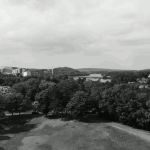 Testing the drone over Quinsigamond State Park in Worcester, MA.

One thing I’ve often talked about is testing. Whether it’s a screen test prior to a theatrical screening or testing equipment prior to a live event, I’m adamant about testing prior to production or going live.

I still remember to this day, that despite testing equipment the day before, a major live event I produced years ago ran into a major technical problem during the show. What happened? Someone behind the scenes decided to “think” and change the program without consulting anyone. The result? A total screw up. Thankfully the embarrassment was resolved in short order and the venue credited us $14,000 for their mistake.

Production is time and money. If you don’t set aside time to rehearse, test and think things through, the results can be disastrous if not embarrassing.  In the past two weeks I have witnessed two major meltdowns with camera equipment during auditions. How does that happen in today’s day and age? And why don’t you have a backup system ready to go at a moment’s notice? It’s called preparedness.

As for preparedness, I attended the Memorial Day services at Battleship Cove last Monday. Not only does this museum do a wonderful job in organization and presentation, it’s the location itself that brings forward the meaning of this national holiday. When you are standing on the deck of a battleship that fought in World War II, it doesn’t get any more real than that.

I’ve been to Battleship Cove on a several occasions. There’s always something new to learn and discover. When so many are engaged in the here and now, it’s important that we take the time to never forget how and why well over 50,000,000 perished in World War II.

With less than two weeks to go until First Signal’s table read, pre-production continues on a variety of fronts. At this stage of the production it’s more waiting to hear from certain parties for confirmations, etc.  I will say the DJI Spark continues to perform well for the required drone shots.