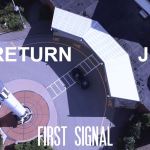 The Massachusetts premiere of First Signal at The Strand Theatre could not have gone better. As this theatre has screened the majority of my films to their enthusiastic audiences, it’s like returning home.  Aside from the superior picture and sound quality at The Strand, their customers are true film aficionados.

One, prior to the start of the film, mentioned to me how much she loved independent film and was particularly excited to see something that was produced locally. Another woman and her grandson, who both love science fiction, asked me if they could have the poster that was on display in the lobby as a souvenir.  When she asked if we would sign it, Chris Goodwin (who plays James Griffin in First Signal) and I were more than happy to oblige. Honestly, it’s these types of moments that you remember with fondness—people that simply appreciate the work that goes into making a motion picture.

The next leg on the “First Signal Tour” has us returning to the place where it all started – The McAuliffe-Shepard Discover Center. This coming Friday at 9 PM outside under the stars, First Signal will have a free screening to the public. It seems fitting that a film about an alien civilization from another world is exhibited among a sea of them. Who knows, perhaps like the story in First Signal, one of them will be looking.

I still remember the day when I first visited the Discovery Center, from seeing the 1:1 replica of the Mercury rocket soaring to the heavens outside to the innovative exhibits inside that were all things space and terrestrial science. When one conversation led to another and we found ourselves filming in May 2019, the entire atmosphere of the Discovery Center fit perfectly into the First Signal story. As a filmmaker, I could not have asked for more and will be forever grateful to those at the Discovery Center for providing the backdrop in the world of First Signal. To learn more about this Friday’s screening, please visit the Union Leader’s story “Sci-Fi film ‘First Signal’ takes over McAuliffe-Shepard Discovery Center.”

And while First Signal will be streaming to the stars, across this world the film is being represented by our distributor Indie Rights at the Marché du Film (Cannes). This is my first film represented by a distributor at this market. Will First Signal see some additional sales in foreign markets? Perhaps some new distribution opportunities? Only time will tell of course. But the important thing is that First Signal is there.

As a filmmaker, we always want more for our films, but I can honestly say that I’m more than thrilled to see the accolades, media, distribution and theatrical opportunities that have already been bestowed on First Signal. My thanks to all that have made it possible.