The forecast for First Signal’s world premiere on March 26 was for rain. One of the actors and I were actually tracking the weather during the day. Suddenly, as if instructed by Mother Nature, the sky cleared in the afternoon. While driving to the Greenfield Garden Cinemas to debut a film that I have arguably been working on in concept for over a decade, I was just slightly numb. While I was happy with the final result, I haven’t seen some of the actors and crew since we wrapped production in 2019. Naturally, I wanted them to be happy with it. But one thing was certain. After this past year, it was wonderful to be out socially. That was the overriding feeling of everyone—and having a world premiere was the icing on the cake.

Daniel Groom, the Director of Photography and Editor, arrived before I did. After a few moments of catching up we found ourselves in the theater for a few pictures. Then shortly thereafter, the actors started to arrive. In so many ways it was like I just saw them yesterday. After about an hour of pictures and catching up, First Signal was about to debut.

With my welcome speech concluded, I found myself in my seat with a bag of heavily buttered popcorn. My only worry was that the projection would stop or that there was some sort of error on the DVD. But before I knew it, I found myself actually being able to relax. The one hour and forty-two minutes went by pretty quickly. The moment First Signal cut to black the theater erupted in applause. I could not be more thankful to the cast, crew, theater and audience that made First Signal a reality.

One thing I realized this past week was the importance of a theatrical release. Whether it’s a one night, one week or one month engagement, the important thing for any film is to get “booked” by a theater. When your film is booked, it goes into a system that is linked to a variety of other sites. From IMDb to Rotten Tomatoes, it establishes the film from an industry point of view. I have to say I was pretty proud to report our box office revenue.  Call me old fashioned, call me an elitist, it doesn’t matter—I’m just pretty damn proud that I was able to report “box office revenue” yesterday.

Soon First Signal will be released digitally, and an entirely new audience will be introduced to the film. There will be those that love it, those that hate it and those that will simply discover it.  At that point, my director hat will hang on the wall, while I replace it with one that says marketing director. For the next several months it will be my job to promote the film across as many channels as I can. I do look forward to bringing First Signal to the world.

But putting aside accolades and achievements, there was something I noticed last Friday that needs to mentioned—support. There were some audience members that drove for hours to support either the theater, the film, the actors or all three. They were there because they knew the dedication, perseverance and drive that goes into this industry. Whether you own the theater, direct the movie, operate a camera or act in the film, this industry is about community. It’s about like-minded people coming together for a moment to provide that one thing that can unite us all – entertainment and an escape to an imaginary world.

The day after First Signal had its world premiere, I received an email from a woman who took her grandson and great grandson to see the film, “Your film was enjoyed by myself, 16 y.o. grandson, and 11 y.o. great grandson on Saturday at Garden Cinema. Congratulations, thank you for sharing your artistic creation of a fantastically believable story that was very interesting, well-acted and just plain fun. Stepping over the threshold of the theater was itself mesmerizing and just got better from there. My heart was warmed by the minutes the boys excitedly shared their particular thoughts and impressions about the intelligence-based film as we drove home.”

And that ladies and gentlemen is why we do what we do. 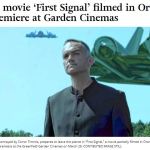 After four years of development, First Signal is ready for release. With our world premiere at the Greenfield Garden Cinemas on March 26 for a one-week engagement, I can’t help but reflect on all the moments that are leading up to this Friday. I still remember that day in Newport, RI at the Naval Justice School when Patience McStravick and I started talking about some sort of film that would largely take place in one room. Then taking those thoughts and going through my “First World” archive to create First Signal. Eager to put First Signal into production, Patience introduced me to an intrepid filmmaker by the name of Daniel Groom. With the producing team set, First Signal moved from script to reality. That reality comes to life on Friday at 7 PM in a theater—the way it was intended.

From our world premiere, some of us will then travel to another location a couple of days later to tape actor interviews as part of our upcoming VOD release marketing efforts. The marketing plans that have been developed over the last several months are probably the most extensive I’ve laid out for a project. For it’s not just the local marketing tied to our world premiere, but literally reaching the world after First Signal is released to VOD. It’s more than just social media posts but coming up with ideas and content that introduces First Signal to targeted audiences.

On the local front I could not be more pleased with our coverage to date. With reporting in The Greenfield Recorder and The Republican, our engagement at the Greenfield Garden Cinemas is being well publicized. We could not have asked for a more exciting theater to have First Signal’s world premiere. Out of all the theaters I’ve worked with in the past, the marketing and public relations efforts that Isaac Mass (the owner of the theater) has been putting into First Signal’s world premiere are second to none. These are the types of partners that are wonderful to work with because of the passion they bring. They’ve created a sense of community, which is what the theatrical experience is all about. To Isaac, his wife Angela, and the team at the Greenfield Garden Cinemas—thank you for everything.

In other news, I also received word that First Signal passed QC (quality control) from our distributor Indie Rights. This is indeed good news as we are clear for VOD release. I’ll be announcing our VOD release plans in April.

This coming Tuesday I’ll be at the Greenfield Garden Cinemas for First Signal’s screen test. Having attended these tests with my first feature film Justice Is Mind, I have to say this is another moment in the process that’s exhilarating. In a dark theater suddenly years of work, and the efforts of many, come to life.