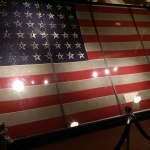 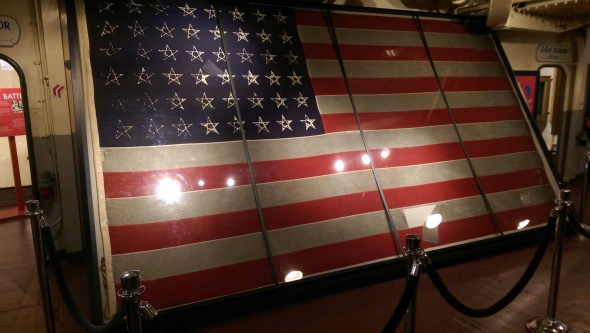 The American flag that flew on the USS Massachusetts during Operation Torch.

Today is Independence Day in the United States. We refer to it as the Fourth of July. 241 years ago the United States declared its independence as a sovereign nation from the British Empire. As we know, the United Kingdom has been one of our strongest allies for over a century and is referred to as the “special relationship” between the two countries.

As for the United States and United Kingdom, this past weekend I traveled to the Maritime Museum in Fall River, MA (the museum is now part of Battleship Cove). After seeing the 1953 movie Titanic, I learned that the model from the movie was on display at the museum. And as Battleship Cove had some new exhibits, it was time for another visit. 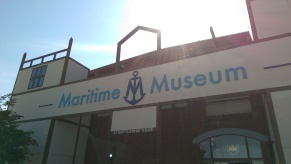 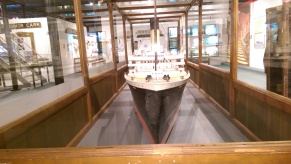 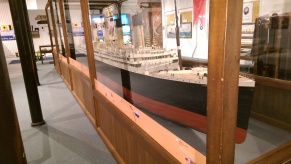 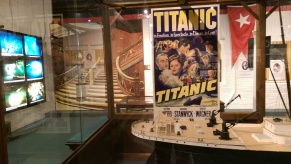 It’s impossible not to learn about the many joint cooperative efforts between our countries over the centuries. The United States connection to the Belfast built RMS Titanic is well known along with the numerous campaigns during World War I and World War II. The USS Massachusetts participation in Operation Torch in November 1942 was a joint United States-United Kingdom invasion of French North Africa. And, yet, for all the reasons our countries have fought side by side for democracy against tyranny, both nations are facing internal political turmoil that is testing the very fabric of our respective constitutions.

As an American citizen I won’t opine on events across the pond, but here in this country today it is as much a celebration as it is a contradiction. Oh sure there’s the requisite barbeque or the spirited trips to the beach, but top of mind of the majority of Americans is the direction in which this country is going. Like the RMS Titanic’s inferior rudder that made the ship very hard to turn in a crisis, the United States is most certainly heading towards an iceberg that represents the internal strife we are experiencing. While on the surface it looks like we can avoid it, like an iceberg, the menace is what lies below the waterline. 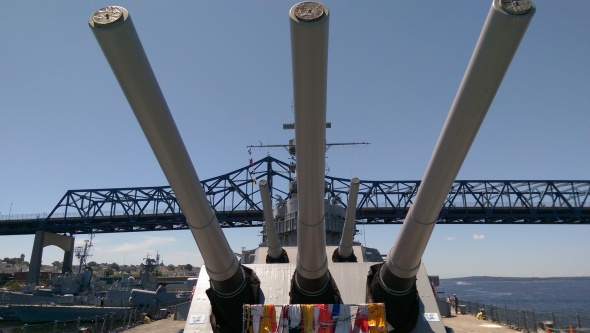 The 16 inch guns on the USS Massachusetts.

As I have been a member of both parties, I consider myself a moderate. Put simply, I believe in equal rights, not special rights. I believe in a strong military administered by the federal government, but that government has no business regulating my personal life. The current crisis isn’t so much about political party but extremists on both sides that are locked in a tug of war to win.  In earlier years, it was the moderates that kept the ship on an even keel. Sadly extremists often don’t want to understand the other side. But understanding is the first step in diplomacy in reaching an accord. A democracy is not about winning your point, it is about moderating it.

Perhaps the time has come to look at our friends across the pond for some lessons. In the United Kingdom, France and Germany they have a multi-party political system. Is it perfect? No, of course not. But for too long in the United States there has only had two choices (this one or that one).  Sure we have a nascent third party in this country, but it has about as much direction as the SS Californian did the night the RMS Titanic sank. 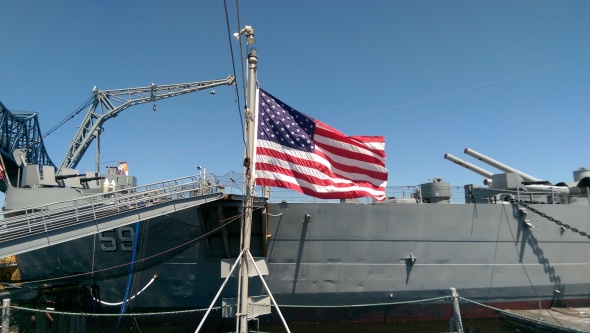 The American flag on the stern on the USS Joseph P. Kennedy with the stern of the USS Massachusetts in the background.

But the one thing we do know is the United States is built on a solid foundation of laws and guiding principles. Sometimes we waiver and falter, but at the end of the day we know what this nation stands for and what it represents. Today is a tribute to the founding fathers of this country and what they laid down over two centuries ago that resonates even more today. 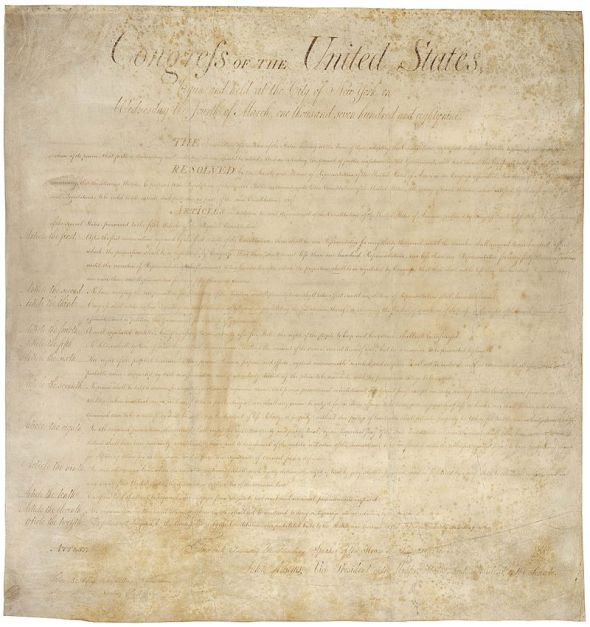 No matter where you live on this great planet, you knew that yesterday the United States of America celebrated the 4th of July. Indeed, that day is a proud moment for every American and for each of us it stands for something different. For me it just comes down to the simple fact that I live in a country that promotes freedom and democracy. But even more important, we live in a country that encourages entrepreneurship. If the film industry is anything, it is built on entrepreneurship.  Watching the History Channel’s America the Story of Us yesterday just cemented the point.

Producing an independent feature film is a great example of entrepreneurship. You write a script, produce the product and get it out to market. Of course there will be those outlets you want your product in who say no, but as I’ve discovered there are plenty that say yes.

When I wrote Justice Is Mind back in 2010 I was just writing a story. What I soon discovered after I saw the completed film was the number of genres, social and demographic groups that I could use in the pitch process. The legal aspect of the trial and the loss of privacy. Advancing sciences and their impact on our society. Passing the Bechdel test. The science fiction appeal. The aged 40+ demographic that has turned out in theatres. The list goes on. 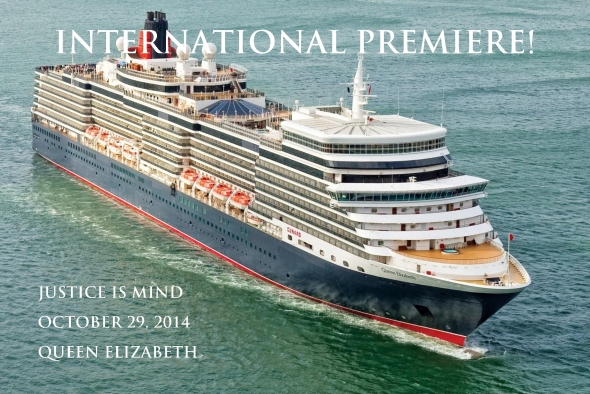 I read in the trades of so many films “bypassing” theatrical and going straight to VOD. Sure, I know it’s the same as when films used to go straight to DVD. But in my view, I wanted to bring some sort of following with Justice Is Mind before we went to VOD.  I believe a film needs a theatrical run. No matter how few or many the venues, I think it’s important that you demonstrate some sort of public interest in the film. With our theatrical run to date, I’ve learned 1) the media was interested in reporting on our film and 2) the demographics that made up the audiences. We’ve established a foundation and with it a following.

Sadly there was a filmmaker in a trade publication this week that was waxing on how a theatrical run isn’t necessary, paid too much attention to an article in the New York Times by Manohla Dargis and said that film festivals deliver the best audiences for your film. While film festivals may work for some films, the bottom line is a film festival audience is vastly different from a traditional theatre audience who has purchased a ticket for your film sitting in a theatre that has your film on the marquee. With Justice Is Mind there has been no four walling (renting of theatres) we just work very hard to interest theatres in our story. To that end, I will be meeting with another theatre next weekend.

On Thursday, July 10, 2014 Justice Is Mind will have its VOD premiere on VHX! Shortly after that the film will appear on other VOD platforms. And like our theatrical run and upcoming international premiere on Cunard Line’s Queen Elizabeth on October 29, 2014, it all comes down to the pitch. Some will pick us up. Some won’t. In the end it’s all about developing an audience.

With all I’ve learned with distributing Justice Is Mind and the distribution changes in the industry, it makes me even more excited about the prospects for SOS United States. 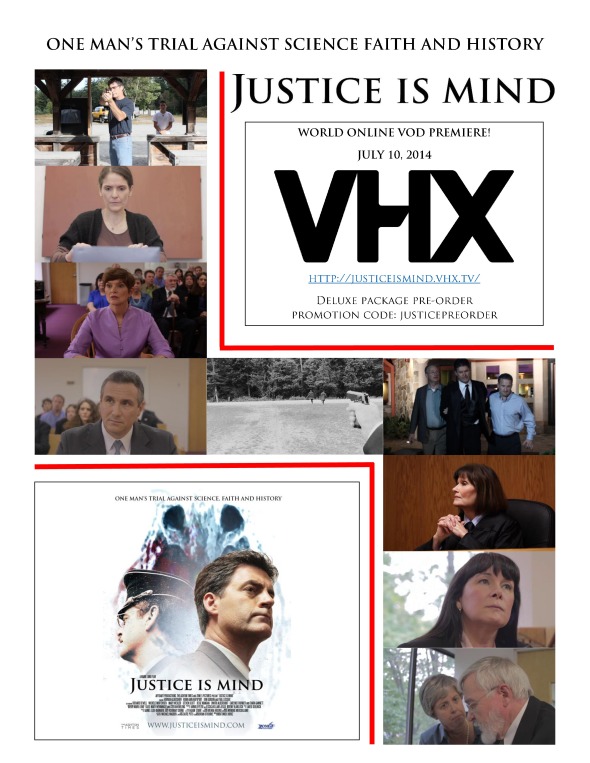