As I was driving to Boston on Wednesday to attend my first World Figure Skating Championships since 2003, there was the fair share of wondering, and a bit of apprehension, how things would go. In years long past, there was a series of things I had to accomplish from interviews, to pictures, to attending the right functions and even going to the right official hotel bar post events (and perhaps the coveted invite to the after party). It was a tried and true agenda that served me well. But that was well over a decade ago when the sport was at its height in popularity in the United States. But now, there was no agenda just observation. To turn a phrase, I needed to get a lay of the ice.

I passed through the same security gate that I long remember from attending the Stars on Ice and Champions on Ice tours.  The former is still with the sport but vastly abbreviated, the latter is sadly gone. Indeed, I knew that the “studio system” of the sport had long passed. But like the Hollywood of yesterday, motion pictures are still made, they are just presented differently. And different is the current state of the sport of figure skating. But it is the familiar faces of those off the ice that have always made the sport tick.

After riding a freight elevator to the 9th floor (this is the slowest elevator in the world, best bring a snack) to the media center I soon saw Lynn Plage. Lynn is the sport’s consummate publicist who has promoted, guided and mentored more skaters, events and journalists than I could ever count. No sooner did we exchange the mutual reunion greetings and obligatory “catching up” and it was like we picked up where we left off those years ago.

And while there are the publicists there are also the journalists. The sport has many fine journalists that regularly cover the sport, but there is the quintessential reporter of them all, Christine Brennan of USA Today. I met Christine at my first World Championships in Birmingham, England in 1995. We shared a train down to London after the event and she taught me the “pyramid” in writing. These are life lessons and moments you never forget. 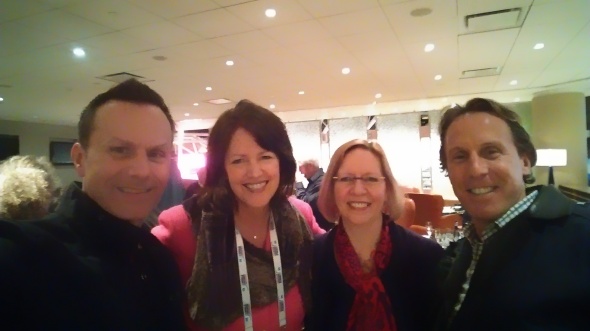 Arriving at the media seating I was soon greeted by Ari Zakarian. In those early days I needed a “foreign correspondent” who was everywhere and knew the European and Russian world of the sport. I armed him with a pager and the reports flowed in. In those pre-internet days, it was all about print for the latest news. Now an agent to skaters, event producer and country representative, his days of hard work traversing the globe had paid off.

As for agents, like the importance of having a solid publicist to promote the skaters and sharp journalists to report on them, there is David Baden of IMG. I’ve known so many agents over the years, particularly those that work in “Hollywood”, but no agent works harder for his clients than David. But David also was the consummate collaborator. I can’t tell you how many marketing partnerships I worked on with David, partnerships that worked for all concerned. At the end of the day, it’s about building a mutual business. 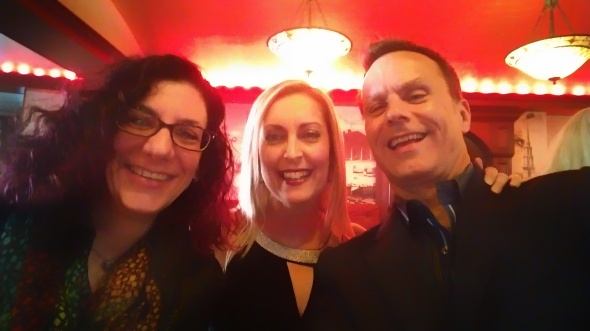 Of course there is the one component that all publicists, journalists, agents and producers need and those are the skaters themselves. I’m not just talking about technically proficient skaters, I’m talking about those that have a personality. Those that understood that it wasn’t enough to just to land the jump you had to present yourself just as much off the ice as on. Philippe Candeloro is such a skater and it was great working with him on one of my skating cruises. Running into him and Tonia Kwiatkowski, another skating cruise alum, fondly reminded me of when we boarded Royal Caribbean’s Voyager of the Seas for a skating event at sea! (Cruise ships and events. Does this sound familiar? Justice Is Mind’s international premiere on Cunard’s Queen Elizabeth). 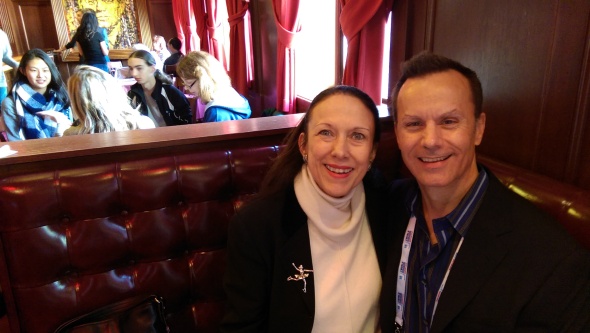 Indeed, the teams of people I worked with during my days publishing a figure skating magazine, most certainly led to my work as a filmmaker. Working with actors (skaters), crew (productions) and marketing/PR elements in the sport most certainly paved the way. But there was a path before that was the foundation of what I do today.

A couple of weeks ago Sheryl Franks and Elin Schran sent me a Facebook event invite for a reunion party at World’s.  This was one, if any, of the few social events happening during World’s but my invitation was a maybe until I committed to attend. Of all the parties I have been to over the years in skating, this one, I think, may have won the Gold medal.

My best friend Kim Merriam and I were the first ones to arrive (Kim was one the producers on Justice and we used to skate together back in the early 80s). But soon, skaters and coaches I worked with locally started to arrive, then the personalities from the legendary Dick Button, Tenley Albright, Ken Shelley and Paul Wylie, to venerable producers of Broadway and skating events (some on cruise ships!), to choreographers, coaches and those that have long linked the sport behind the scenes with their executive experience and philanthropy. One of these great links is Moira North who founded The Ice Theatre of New York. Coordinating their annual gala one year during my New York City days was a real eye opener on how to run an event. Lots of lessons learned!

As for lessons, I’ll never forget my first credentialed event as a member of the media. It was called Skates of Gold and was held at the old Boston Garden back in 1993. It was at the post event reception that I first met Dick Button. I remember mustering up the courage to introduce myself and mentioned I was going to start a figure skating magazine. He graciously smiled and said, “How very good for you.” For anyone that knows Dick you can picture the response! He soon became one of our biggest supporters and a friend.

One of the absolute highlights of the party for me was seeing my old skating coach Darlene Parent. When I lived in New York City in the 1980s and got up at 4 in the morning to skate (before I went to work at TIME magazine), I trained at the old Sky Rink. Not only was Darlene my skating coach she was also the chef and made us breakfast after our lessons. She would literally show us moves while flipping an egg (you can’t make this stuff up!).

Indeed, this week has been a world reunion and great trip down memory lane. But in the here and now in 2016, like the entertainment industry itself, the sport of figure skating is going through a transition. A transition that has seen its fan base seismically erode. Some say it’s the change in scoring. Some say it’s because the United States hasn’t produced “stars” like it once used to. Some say it’s because there was a saturation of sameness back in the heyday of the 1990s. Some say there wasn’t enough innovation.  What’s the answer? Perhaps a bit of all those reasons. But something tells me that this downward trend could possible see a bit of reverse.

One only has to see the enthusiasm of the Japanese and Russian audiences to know that the sport is alive and well in those markets. I have seen video excerpts of a figure skating event in Russia that literally presented the sport as “Cirque du Soleil” on ice. These events were sold out. But there was something else that was nearly sold out as well—the events this week at the 2016 World Figure Skating Championships. Is this a new trend? It could be.

If you told me 14 years ago that the United States would medal in ice dancing I would have laughed in your face. But here we are in 2016 with Maia Shibutani / Alex Shibutani and Madison Chock / Evan Bates winning the silver and bronze medals respectively. While the United States men did a glorious job, it’s all about the quad. I wish I could say it wasn’t but it is.

As for an electrifying moment, Ashley Wagner’s win of the silver medal ended the 10 year drought of an American woman winning a medal at the world championships.  Skating last to a capacity audience you could just tell with every second passing this was going to be a performance best for Wagner.  Her gracious enthusiasm at the press conference reminded me of earlier days. Could those days be returning? One thing is for sure, this is a sport about personalities and Wagner certainly understood that off ice is just as important as on.

In the end this is a sport that endures. It is owned by no one but graced by everyone. It is these collective contributions that have always given the sport its edge and vibrancy. That may sound like a colloquialism, but this sport will never be judged by a stopwatch and because of that uniqueness it earns a special place as both sport and art.  And just like Hollywood itself, figure skating is about performance and box office. Some pictures do well and some…well…you get the point.

As for the entertainment industry, having accomplished what I wanted to this past week, I return to writing my political thriller around the sport and art of figure skating.

Finally, I just have one thing to say to the organizers of the 2016 World Figure Skating Championships and all those that made it a memorable event. 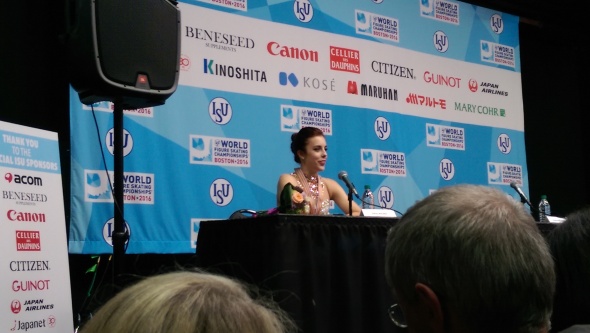 Ashley Wagner, the 2016 World silver medalist, at the press conference.