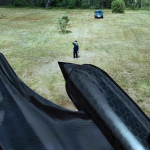 Over the weekend I attended another wonderful re-enactment event at the American Heritage Museum. The Battle of Bunker Hill was produced with enthusiastic re-enactors that brought to life one of the famed early battles in the American Revolutionary War. While I have attended numerous re-enactment events, these re-enactors went out of their way to engage with attendees to discuss this critical time in American history. Suffice to say I learned a few things!

While producing a movie is all about pre-production, rehearsals, etc., these re-enactment events are like watching a movie unfold in real time over several hours rather than months. Yes, most of these groups have all worked together, but their ability to produce this type of entertainment so quickly is impressive. For those of you in the New England area, the re-enactors from this past weekend will next perform at Old Sturbridge Village on August 6 &7.

Those of us that produce true independent feature films, do so because we love to tell stories. While we always hope for a return on our investment, it honestly isn’t top of mind. Yes, staying within a budget that has some hope for a return is important, but that cannot be the driver. The driving motivation to produce must first be a love of the craft.

I remember towards the end of principal photography on First Signal, that despite sweltering 100-degree heat, I was just vey excited to work those final days. Perhaps it was the realization that I knew the quality we produced the previous weeks, or it was getting into the rhythm of doing something that just felt natural. Whatever the reason, I do look forward to the day when I’m bringing my next project to life.

As for my next project, I completed my director reel a few days ago and will post it sometime this week. Having reviewed my previous five films and cutting out scenes that looked interesting, the challenge to select was just that: a challenge. The question begs to be asked, just what is a director reel? Having reviewed countless reels from other directors the question, in my view, is still unanswered. Some focus on cinematography, others focus on an intense scene or two, while some focused on visual effects. To be frank, they were all over the place.

In the end, I selected a variety of scenes and moments over a track of music that I believe reflect the scope of work I’ve produced over the years. For me, I wanted to show versatility in my directing ability. From conceiving a scene in outer space, to a confrontation between actors, to sports; my goal was to present a well-rounded view of my directing capabilities. While this reel doesn’t have a singular story arc per se, I think it does reflect that I like to tell stories that are unique in concept and execution. 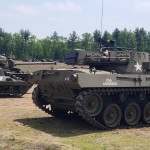 Over the last several years I have had the opportunity to attend a variety of military and “living history” museums. One of the former is the American Heritage Museum with one of the latter being the Massachusetts Military History Exposition. Both of these organizations are located in Massachusetts and each offer a unique experience in military history both static and living.

On Saturday the American Heritage Museum hosted a tank demonstration weekend.  Seeing the M4 Sherman, M24 Chaffee, M26 Pershing and others in action was truly a unique experience. As I’m currently reading Normandy ’44 by James Holland, I was imagining these tanks in great battalions doing what we only read about and seeing from film reels taken at the time. The event also featured two WWII veterans offering their firsthand experiences to attentive audiences.

There was a moment when I was listening to the veterans experiences when several tanks were driving behind them in the near distance. It was in that moment, coupled with them talking about the sheer number of planes, tanks and soldiers involved in WWII, when you could almost visualize what it may have been like. Of course, I will never know what that experience was like. But that’s what makes these types of events so important — we experience, learn and never forget.

On Sunday I attended the Military History Expo produced by the Massachusetts Military History Exposition. If memory serves, this was my first “living history” military museum that I attended.  Dan and Missy Eaton, who produce the event, always do a masterful job at incorporating a variety of experiences for the visitor.

When you first arrive you see the encampments featuring reenactors from various points in military history. From the American Revolution to WWII and beyond, the enthusiastic reenactors discuss the place in history they are representing and portraying.  Adding to the experience are the various events programmed throughout the day. This weekend, there were discussions about uniform styles, weapons demonstrations, artillery firing and ending with a WWII battle in the field.  There’s no question you arrive enthused, and leave having learned or experienced something new.

For me, I always find the “communications tent” a fascinating experience. Reading about the enormity of the Normandy landings (Operation Overlord) and learning how communications were built as the fronts advanced is nothing less, in my view, than a miracle of organization and determination.

It is through events like this where we learn what caused the conflicts that created such a history. They say that if we don’t learn from history, it has a habit of repeating itself. Sadly, that repeat came in February when Russia invaded Ukraine. While I theorized about just such a conflict in First Signal, I could not have imagined that in the 21st century there would not only be a war in eastern Europe, but one that has taken on the complexion of the atrocities we saw in WWII.

“Get it all on record now – get the films – get the witnesses -because somewhere down the road of history some bastard will get up and say that this never happened.”
― Dwight D. Eisenhower