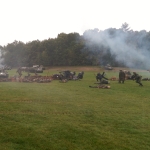 “Battle for the Airfield” The Collings Foundation

This past week was another busy one as pre-production moves along for Serpentine. But today was a visit to The Collings Foundation production of “Battle for the Airfield”. To quote from their website, “There will be over 300 re-enactors representing several branches of Allied and Axis military participating in an amazing re-enactment.” The event did not disappoint.

Although it was raining, the announcer reminded us all that wars are not always fought on warm sunny days. Indeed, it was like watching a conflict in real time. Unlike a movie set with constant calls of “action” and “cut”, there was no stopping once the action did start. When the tanks started to roll the re-enactment was just as good if not better than any Hollywood production. The filmmaker in me wished I had cameras recording it for some upcoming production. All I could think of was the battle scene in 1953’s War of the Worlds!

At The Verve, Crowne Plaza Natick. The Aquarius Boardroom.

Just prior to the start of the battle, the national anthem was played. I’ve heard our anthem played in many venues, but there’s something special to hear it against a military backdrop with veterans present. When I think of the tens of millions that have sacrificed themselves for this country, this American proudly stands and turns to honor our flag and all those that have defended it.

Speaking of old glory, the flag will be part of the set dressing for our FBI conference room scene at The Verve, Crowne Plaza. On Thursday I visited the hotel for a site visit. The room looked just as great in real life as it did in the pictures I saw prior to my visit.

A site visit is another one of the critical components to pre-production as there are usually things that need some sort of adjustment or that may have changed. In this case, a couple of posters to cover up artwork on the opposite wall and a movie screen has replaced the TV screen. Actually the movie screen is better as it gives us more room in post-production for images that our VFX specialist will put in. A special thank you to Lynne Luongo, The Verve’s General Manager, for the personal tour!

Earlier in the week I was reading the script again for other creative components. One scene has a character leaving in a car—a car that will be getting a fair amount of screen time. As this character comes forward to sponsor a skater in the story, I wanted something high end that said wealth.

Although there are countless dealerships in the area, there is only one luxury dealer I wanted to approach to see if they might be interested in working with us. When I visited Foley Motorsports website, I was thrilled to see that they have direct staff contacts, including owner RJ Foley. After his review of my presentation, I’m delighted to report that Foley Motorsports will be providing a luxury vehicle for Serpentine. Now, here’s fate for you, his daughter used to be a figure skater and will be appearing as an FBI Agent at The Verve!

As for figure skating I visited Northstar Ice Sports again this week to work out some additional details on our upcoming shoot and to skate again. Yes, I’m getting the skating legs back underneath me to assist in the production when we start to shoot the on ice scenes. It is interesting being back in a rink again and on the same ice as my first coach Denise Marco, who is not only the Executive Director of Northstar but will be playing Elizabeth Rogers in Serpentine.

Inside The Collings Foundation hangar.