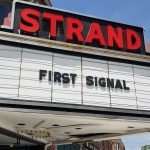 While this year is coming to a close, this was the first year that my concept for a new sci-fi franchise was realized with the release of First Signal. This time last year I stated on this blog that I was going to start planning for the theatrical and VOD release of First Signal. I didn’t wait for permission or public consensus, I just set the goals accordingly and executed the plan. The result was the world premiere at the Greenfield Garden Cinemas on March 26, 2021 followed by our VOD release through Indie Rights on April 26, 2021. Like an icebreaker charting unknown Arctic waters, moving forward was the only course.

With six theatrical/event screenings along with a multi-platform VOD release, 2021 worked out well for First Signal. With over 17 film festival awards and an estimated 500,000 views, I could not be more pleased with First Signal’s results to date. Although I was hopeful when I set out to create First Signal, there are so many unknowns when making a film never mind releasing one.  Yes, there is a captain at the helm of a film, but without a dedicated cast, crew and audience, a project will just sit in port. If there is one thing I learned throughout this process, it’s about continuing to market and promote after the initial release.

As for continuing, when I was at First Signal’s screening at the McAuliffe-Shepard Discovery Center in July, I mentioned to a few in attendance my idea for a sequel. I had already written First Launch that was set two years after the events in First Signal. However, I always felt there was a story in between those years.

With the idea now in mind, I started to write. What I thought was going to be a relatively simple storyline, turned into a multi-faceted political thriller that transcends two continents. While the story is a large one, I did write it with an eye to produce it. Having produced Justice Is Mind (with a sizable cast and multiple locations), and First Signal (a tight story with a handful of actors), this next installment in the First World Universe involves a bit of both production techniques. Look for an announcement on title and logline shortly.

This past year introduced SOS United States to the film festival circuit. With over 10 awards to date, SOS is receiving some wonderful attention from the industry. SOS is one of those projects that I would simply love to see come to life on the silver screen. Of course there’s the story itself, but for me it’s seeing the return of the Concorde and SS United States in all their grandeur. There was a moment in time when we had a choice to travel by supersonic air or in transatlantic luxury by sea. Thankfully, with Cunard Line, the latter is still with us.

One thing I enjoyed the most this past year was the theatrical and event screenings we had for First Signal. While those have been challenging since last year, I’m proud to say that they were accomplished. Seeing those that helped bring First Signal to life and meeting audiences that came to support the film, meant the world to me. While I have sadly learned that one the theaters that has screened most of my films is closing, I will forever remember the wonderful memories of those events. Thankfully, they are immortalized in pictures.

I think we can all agree that these last two years have been challenging. But the world has faced challenges before and has come through brighter than ever. They say there is a light at the end of the tunnel. Well, another thing I’ve learned over the last couple of years, is that there are many lights in the tunnel if we just take the time to look.  Remember,

“The business of life is the acquisition of memories,” Mr. Carson, Downton Abbey