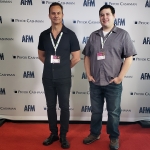 On Thursday I returned from my second attendance at the American Film Market (AFM). By all accounts, it went well. This year I was accompanied by Daniel Groom, First Signal’s director of photography and editor. He was also representing his own feature film Alternate Ground.

My attendance at AFM in 2018 was generally a fact-finding trip and learning how a film market works. Yes, I had meetings, but it was more to promote projects in development, like First Signal, and to represent my first feature film Justice Is Mind. It’s important to note that AFM is not a film festival. Yes, AFM has screenings, but they are mostly for buyers and sales agents.  AFM is one of a handful of film markets around the world. Simply put, these markets are where deals are done for independent filmmakers.

Preparing to attend a film market is the same as pre-production on a film – preparation. You research who you want to meet, make a pitch and hope for a meeting. Like an actor preparing for a part, you rehearse, memorize and have talking points. If you can’t articulate your own film, it’s hard to expect sales agents and buyers to take any interest. In a curious twist, I was in a meeting when someone wanted to present their film regarding locations they were looking for. Oddly, they couldn’t really present the logline or what the general concept was.

I would say my last meeting at AFM was the probably the best one of the market. First, they were specifically looking for films like First Signal. I met with the principal of the company and two representatives. In their suite, I was able to make a complete pitch for First Signal. From development, production to goals for a series of films in the First World Universe. I stressed the importance of marketing and kept an open mind on their points, some of those points being working with them to plan for a rollout in upcoming markets.

There is another point that’s stressed at AFM and that’s professionalism. From scheduling meetings in advance to how to introduce your projects when you don’t have a meeting scheduled. All in all, my experience was positive. But here I was in a booked meeting with a sales agent when another filmmaker arrived, interrupted my meeting and pretty much insisted the agent give them a few minutes. The agent mentioned they were in a meeting, but this filmmaker didn’t care. I just looked at this filmmaker blankly taking it all in.  When the agent returned and apologized, the first thing I said was you don’t need to apologize for someone else. I’ll just say this—it’s all about first impressions.

In the end, AFM 2019 was a great market for what I was representing. This industry is rapidly changing from an economic point of view. The differences between 2018 and 2019 were apparent and stark. It’s truly about being adaptable and going with the flow. Having worked in the publishing industry, I’ve seen the advent of digital change. I knew some years ago that VOD/streaming was going to truly be the primary revenue driver for most independent filmmakers. That reality is now here.

But as you will see from my pictures, my trip wasn’t all business. From the Ronald Reagan Presidential Library, to the Queen Mary, Griffith Observatory and the USS Iowa, I always enjoy my visits to “Hollywood.” I also discovered a new navigation app called Waze. Given the traffic challenges in LA (although I think they’re worse in Boston), I highly recommend it! 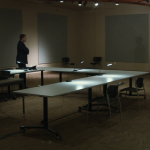 This past week the pitch process for First Signal began in earnest. As long as you follow the process outlined by the American Film Market (AFM), it’s pretty straight forward. There is so much that goes into getting ready for a market. For the last few weeks it’s been about updating my websites, building First Signal’s official website and preparing other marketing materials. They say you only get one shot at a first impression, so why not give your best one.

Post-production is moving right along. The film is nearing the halfway mark with a rough cut, with the first twenty minutes generally scored and color corrected. It’s these twenty minutes that’s being pitched to interested parties at the AFM. I can’t say enough good things about the post-production team of Daniel Groom, Daniel Elek-Diamanta and Adam Starr. The post-production process is highly detailed exacting work. It requires organization, patience and diligence. Traits, I’m happy to say, that we all have. But there’s something else none of us have, an ego that gets in the way of working together. To turn a phrase from McDonald Walling (William Holden) in Executive Suite, “In your own words, Shaw, I have only one interest around here – the good of this company.”

With this post, I’m releasing an additional still that introduces the mysterious Cedric Yonah and James Griffin. Titled “When Worlds Collide,” it follows the previously released still titled “Who are you?” In that still we saw General Reager and Major Sampson looking at someone. Now we know who they were looking at. It is from this point forward in the story that the tension in First Signal builds to a revelation that leads into the sequel.

It’s hard to believe that in six weeks I’ll be back in Los Angeles. It’s even harder to believe that it’s been over ten years since I lived in the city. Like so many of us that are part of this industry we are drawn to LA for its magnetism with the word “opportunity” in the air. While I loved my years living in New York City, it’s Los Angeles that always feels like my second home when I visit.

I was living in LA when I wrote my first screenplay First World. What was the genesis that gave me the idea? It may have been all my visits to the Griffith Observatory. For it was an event at that famed institution when I had the honor to meet Ray Bradbury. For the few minutes I talked to him and told him how much I admired his work, he asked me if I was a writer. I told him briefly about First World, he smiled, shook my hand and said graciously, “You keep writing.”