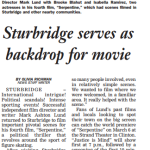 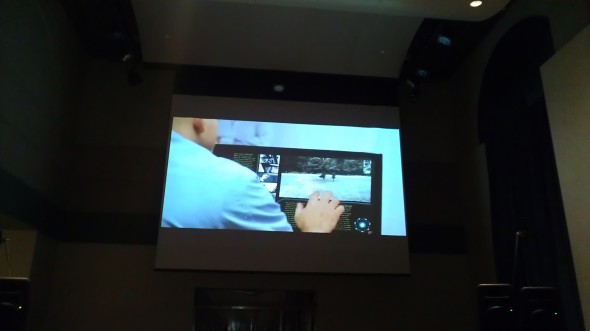 The trailer for Justice Is Mind screening at Upstate Independents.

Being an “independent” filmmaker means wearing multiple hats and this week was no exception. On the post production front of Justice Is Mind, the processing of the special effects continues in earnest. I had the great pleasure of presenting the trailer for Justice at an industry event and on Friday there were some conversations with our distributor regarding the short film version Justice Is Mind: Evidence. From production to marketing to distribution it’s all in a day’s work in the world of independent filmmaking—many hats usually worn by one person.

Long after I called “That’s a wrap” on October 13 the last day of principal photography, the editing began about a week later (heavens knows we all needed a break!). Once our editor had a rough cut complete, the process of identifying the areas that needed special effect work began. To give you an idea of what’s involved; there are 24 frames per second. If a shot is three seconds long that means that 72 frames need to be exported by the editor and sent to me for delivery to our special effects supervisor along with a detailed memo on what needs to be accomplished for each shot. Just as important as writing and actually shooting a scene, each shot needs to be just as thought out. By example, the instructions for the iPad shot I posted to our Facebook page last week: This is Henri looking at an iPad reading the news that’s part of the story. Please see attached assets for specifics on what to put in for this effect. In the assets folder was copy written by me along with pictures I selected. If you look closely at the copy, there is a shout out to a previous film of mine.

This past Tuesday, in Albany, NY, I had the pleasure of screening the trailer for Justice Is Mind at Upstate Independents, an organization for “filmmakers, actors, screenwriters, and other media artists”. I was invited by UI member Vernon Aldershoff who stars as Henri Miller in Justice. I also brought along Monty Lyons who plays Detective Campbell in Justice.  The program called for showing the trailer and then taking Q&A from the audience. Although the trailer has been released through numerous online platforms since January, this was the first time I was presenting the trailer to a live audience. I can’t speak for Monty, but I’ll confess I was a bit nervous. But after the trailer screened, their enthusiastic questions were very inspiring. As a filmmaker, there is nothing more grand than seeing your film on the big screen.

At the FVMRI operations center, monitors show the activity.

Upstate Independents is an organization that I highly recommend. The meetings start with first time attendees introducing themselves (as Monty and I did), then members take to the microphone and talk about their projects. After the introductions and news, a guest speaker is presented. At this meeting, UI invited Jeanne Bowerman the Editor and Online Community Manager of ScriptMag.com to speak. I’ve been following Jeanne’s various columns and Script magazine itself for the last few years. It was great to finally meet Jeanne in person and hear her speak. What I love about Jeanne is she’s honest, inspiring and talks to audiences directly without all that “cheerleading pom pom” stuff you see with “motivational” speakers in this industry. Jeanne talks from solid experience and presents market facts and realities. For anyone that writes, or wants to learn more about the process, I highly advise following Jeanne and Script magazine. 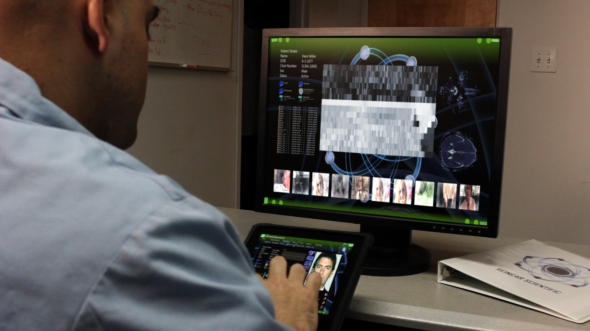 And the processing of Henri Miller’s memory begins.

One thing Jeanne mentioned during the meeting that really resonated with me is for anyone that works in this industry to be kind and say “thank you”.  I could not agree more. This is an industry that is all working relationship and networking built. I promise you those two words can easily translate to work down the road. Likewise, absent being appreciative and you can find yourself “not” under consideration.

Finally, IndieFlix informs me that Justice Is Mind: Evidence is now available on Roku and will be available on their Xbox application around March 26.

Answering questions from the audience after the trailer screened.