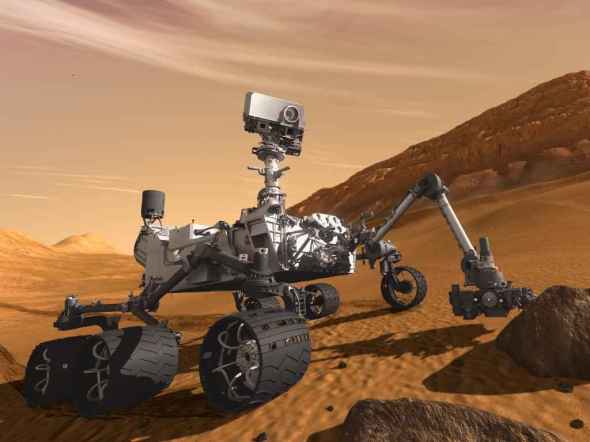 In addition to its sheer size, Curiosity is an engineering marvel. Equipped with a laser to identify the building blocks of life, the 1 ton rover sports 10 scientific experiments including the Mars Hand Lens Imager (MAHLI). Imagine a scientist on Earth being able to see color pictures as small as 12.5 microns of Martian rocks and soil.

I was watching Curiosity’s launch

online with a friend of mine in Canada. As we both worked together on a Star Trek fan film, it’s safe to say we have a passion for space exploration. When he commented on how it’s unfortunate that more people don’t get excited about these launches, it just reminded me of how most just don’t understand the space program and the great benefits it has bestowed on all of us on Earth. I’m not sure if it’s a deliberate ignorance because it’s too much to comprehend or just an unwillingness to want to know and more importantly learn.

I have sadly heard people say that all this “space money” should go to health care. Really? I want to say to these naysayers do you have any idea the advances in medical science that came out of the Apollo space program alone? CAT scanners, kidney dialysis, advances in computing and cardiovascular conditioning that improved physical therapy used in sports and medical rehabilitation centers. Believe me it’s a long list, but you get the point.

And let us not forget the countless jobs and industries that the space program supports and creates. As President Kennedy said during his famed speech at Rice University in 1962, “We set sail on this new sea because there is new knowledge to be gained, and new rights to be won, and they must be won and used for the progress of all people.” And it was President Reagan who echoed the benefits of space exploration, “Our progress in space, taking giant steps for all mankind, is a tribute to American teamwork and excellence. Our finest minds in government, industry and academia have all pulled together. And we can be proud to say: We are first; we are the best; and we are so because we’re free.”

Although they may have had other motivations at the time, one has to wonder if Leif Erickson, Christopher Columbus, Meriwether Lewis and William Clark knew what their explorations would yield for the futures of tomorrow. But one thing has to be certain – they must have all had a “curiosity” for unknown discoveries.