Before I started to write my last blog post for the year, I took a moment to review what I wrote this time last year and the year before. In 2017 it was “One project I’m excited for in the new year is the First World prequel I’m writing.” In 2018 it was “The pre-production process of First Signal continues towards a May launch.” For the end of 2019 I can proudly say post-production on First Signal is well underway.

I’ve often stated the word perseverance and what it means to never give up. I see so many projects being announced with great enthusiasm only to wither away. I’ve also stated that making a feature film is a task like none other. It’s about surrounding yourself with people that share your enthusiasm and vision. If it’s one thing I’ve learned this year is that it’s important to work with those that understand dedication and don’t just call it in. That dedication will be released in 2020 for all to see.

I don’t make New Year’s resolutions or subscribe to the “New Year. New Me” philosophy. By example, I workout an hour a day seven days a week. I know next week the gym will packed. Over enthusiastic people trying to run a hundred miles an hour on a treadmill when they don’t even enjoy taking long walks. They don’t see results in a month, so they stop coming. They don’t know that to run on a treadmill you first have to learn to walk on one. That means showing up, taking small steps and watching your diet. In the entertainment industry I see the posts “My feature will be produced this year!” or “This year I’m going to star in a film!” Um, well, what did you do three months earlier? Just wait for the 1st of January to arrive? Did you look at your script and see how it could be adjusted to shoot on a budget you could afford? Did you see that part in a film but not submit? Remember in this industry there are no small parts. And more importantly it’s all about risk.

When you join a gym you risk not having the body of Adonis after six months. But you know what? After those six months you may have lost twenty pounds, feel and look better and no longer crave that evening pint of ice cream. When you write a script you risk not having it ever produced. But after you adjust for a budget you can afford, you could soon find yourself in post-production. When you decide to be an actor you don’t start as a star. You submit and submit and submit. You accept the roles you can, no matter the size, because that can lead to a starring role.

That happened to one of the stars of First Signal. He was my first choice, but I cast another actor who lived closer to our shooting location. The actor I originally wanted didn’t dismiss the project when I offered him a background role. He stayed interested. When the actor I cast flaked off and ghosted me, I offered the part to him. He breathed life into this character that I never thought possible.

This is an industry not only about accumulating experience but dedication and enthusiasm. If you have experience and are known to be dedicated and enthusiastic, you will be top of mind when a project comes to being. This just happened to me when I was contacted by a production company for a project coming up for a few days in January. It might not happen in the end, but at least I was contacted (with no agent involved).

Believe me I don’t look at this industry through rose colored glasses. We all have those days where it seems like we aren’t gaining any traction or making any progress. But I do believe if you stick with it and are persistent those chances improve tenfold.

See you at the premiere of First Signal in 2020!

Serpentine is on schedule for a February 2017 release.

From the World Figure Skating Championships to the Naval Justice School, 2016 has been a whirlwind of a year. And between these events was the figure skating political thriller Serpentine. From script, to production to media coverage, Serpentine has certainly set the stage for 2017.

With Philippe Candeloro and Lynn Plage.

I’m never one to make New Year’s resolutions. Instead I look at what was accomplished in any given year. For me, there needs to be at least the creation of a new project or perhaps some interesting acting or on camera work. Thankfully for 2016 there was a bit of both. 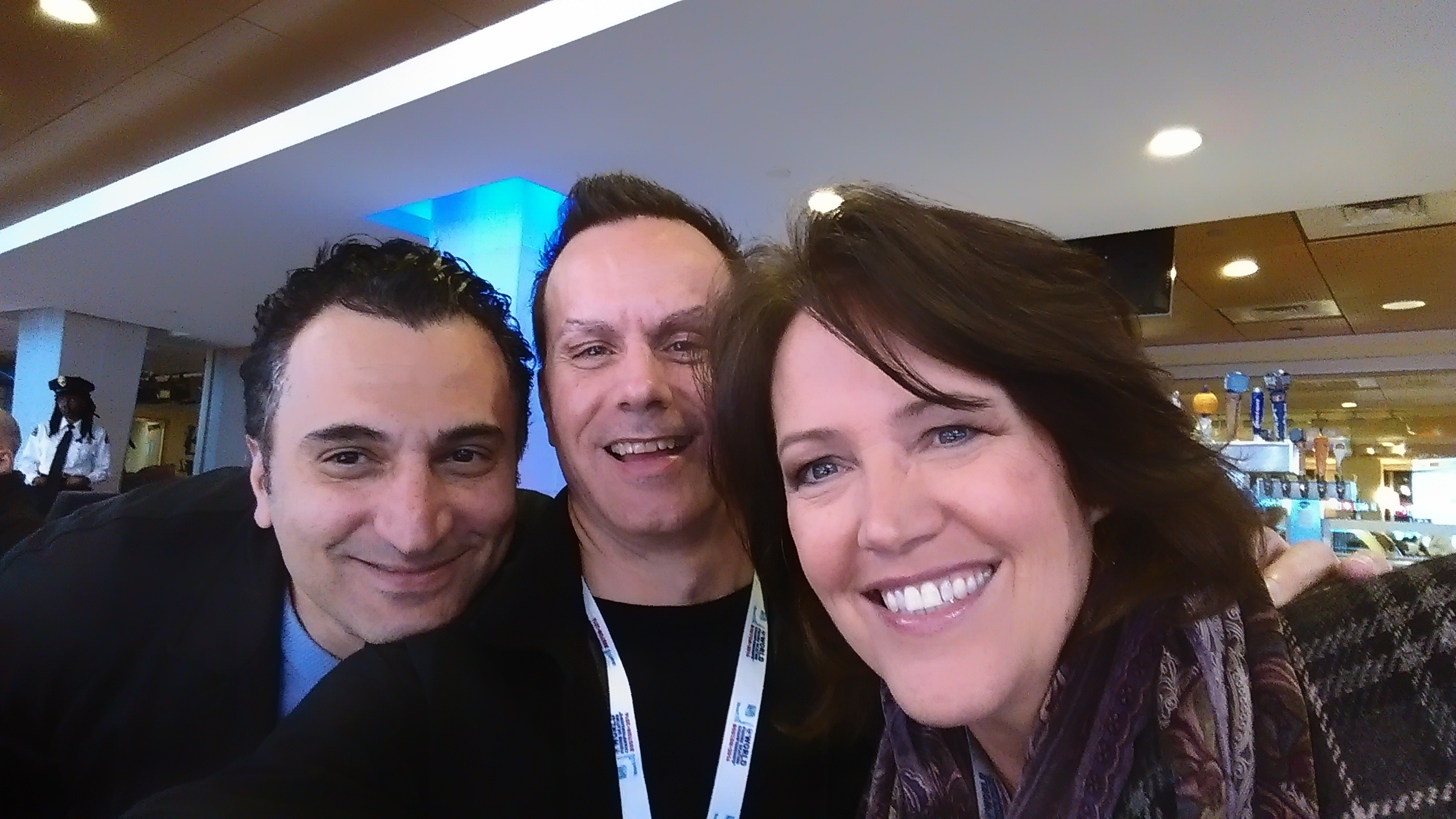 With Ari Zakarian and Christine Brennan at World’s.

Of course we had this thing in the United States called a presidential election. But you can’t define your entire existence over who won or lost. Putting aside that it narrows your world and opportunities, the country goes on no matter who wins or loses. The great thing about the American presidency is every four years we change hands (sometimes). As Scarlett O’Hara would say, “After all, tomorrow is another day.”

How half the United States felt after the election. But, indeed, tomorrow is another day!

As for another day, post production on Serpentine is moving right along and on schedule. We are into the second draft of the edit and I signed off on the opening credits VFX sequence yesterday.  And generally speaking a good amount of the film has been scored. The post-production process of any film (short or feature), takes coordination. Are all the parties on the same page? Is communication flowing from one department to the next? I’ll say this there is a comfort level working with the same parties that brought Justice Is Mind to life.

Serpentine received front page coverage in the Telegram & Gazette with the story syndicated around the United States.

In addition to Serpentine, 2017 will usher in some personal changes. I renewed my membership in SAG-AFTRA a couple of months ago for a variety of reasons. Let’s just say I see more trips to NYC next year. One of the benefits to membership is being able to vote in the SAG Awards and getting DVD screeners. Like the election, I’ll just leave it as what film isn’t getting my vote. 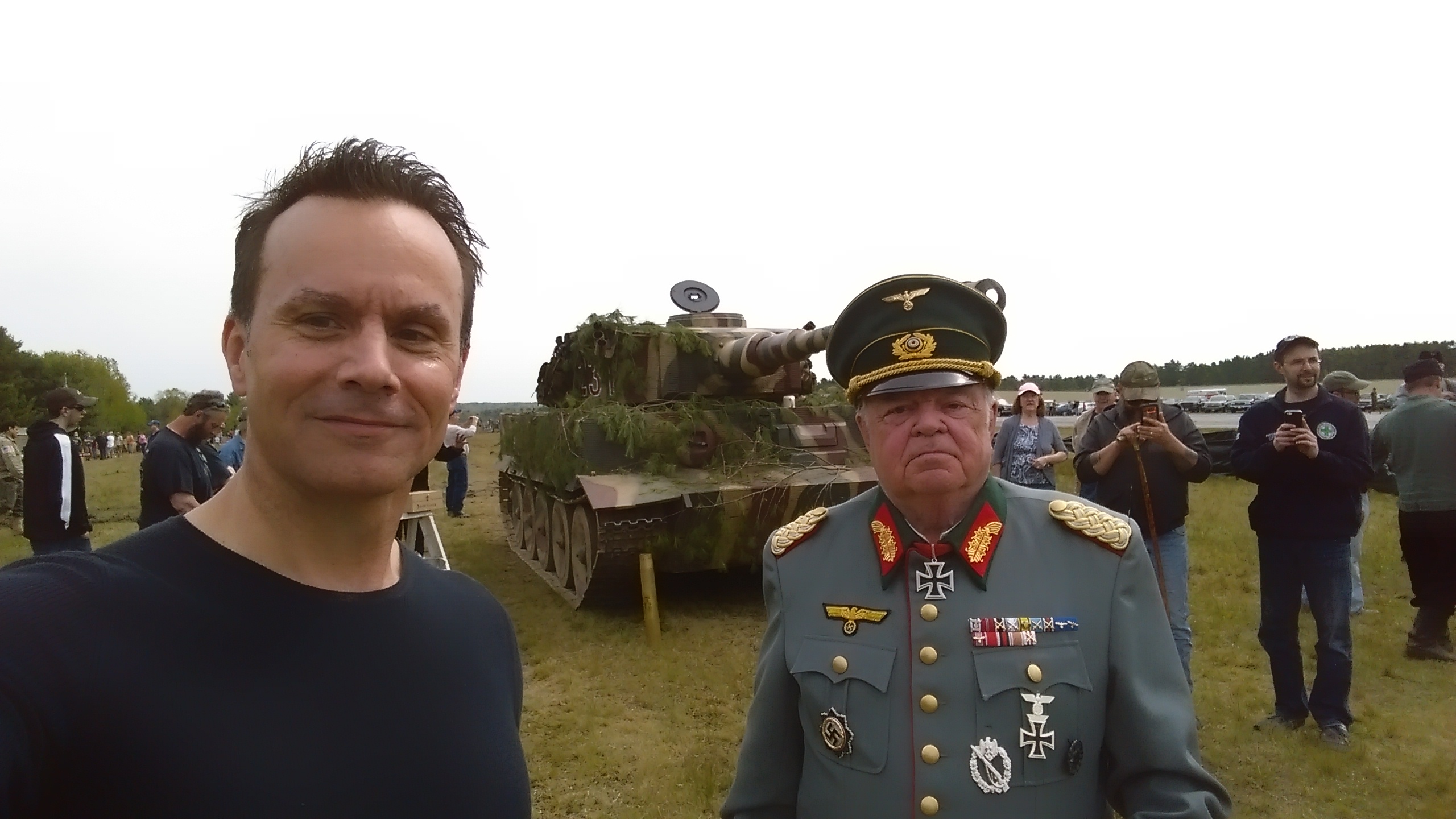 At a WWII Weekend.

But for any given year it comes down to moving the needle just a bit in the direction I want to go in. I don’t try to push for the “all or nothing” approach as that can just set you up for disappointment. Do I outline goals for the near year? Certainly. Are they resolutions? No. Frankly, I’ve never understood those that proclaim with all the caps they can on social media at the start of any year that they’re going to quit X or move to Y! Um, how about just do it for yourself whenever and see where it goes. You won’t know until YOU try not when your “friends” approve.

Sure there’s been some disappointments this year. It wasn’t all champagne and caviar. But there’s no point dwelling on the past or those that tried to check all these bags of drama onto my ship (sorry we’re full up!). Like the car accident I was in. As I thankfully walked away, you just move on (cue Scarlett O’Hara again with score).

Back to Newport next month!

In closing it was great to see the reach of this blog across the world for another year. Your support of these words is very much appreciated. And to you and yours across this great planet… 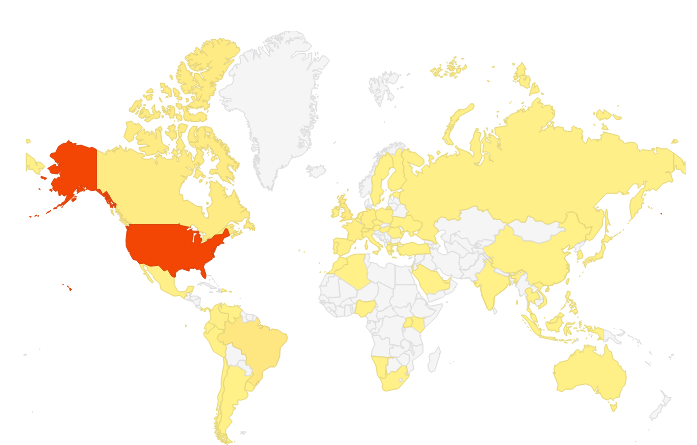 The reach of The Ashton Times in 2016. Thank you for your support!