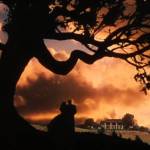 It was sometime in the 1970s when I first saw Gone with the Wind. It must have been on TV as we didn’t have a VCR. The moment I saw this film it quickly became my favorite movie. The story, the actors, the sets, the music, it all worked on so many levels. Since that first viewing, I’ve watched it on laserdisc, DVD and streamed it. This afternoon I’ll see Gone with the Wind as it was intended – in a theatre.

What I always liked about the Gone with the Wind story was the sheer ambition of how it was made. From the “Search for Scarlett” to endless script rewrites to changes in directors, the production was fraught with issues. But in the end a masterpiece was created winning 8 Academy Awards including Best Picture. If you want to learn more about this epic film, I highly recommend the book Scarlett, Rhett, and a cast of thousands: The filming of Gone with the Wind.

There’s no question in my mind that Gone with the Wind inspired my interest in this industry. What I’ve always been particularly drawn to are the “movers and shakers” behind the camera. In the case of Gone with the Wind, it was producer David O. Selznick. For every film made there’s one person you can point to that is responsible for its existence. Oh sure, the actors and crew are vital, but they wouldn’t have anything if it wasn’t for the producer—that one person who sees the vision and takes the risk.

Selznick International Pictures produced another one of my favorite films, Rebecca. It was Selznick who brought director Alfred Hitchcock over from England. That one decision that Selznick made led to films such as North by Northwest and Psycho.

As we celebrate the 80th anniversary of this iconic picture, I look at the modern world of filmmaking. Although Selznick’s company disbanded decades ago, MGM is still around along with a literal handful of the legacy studios (sadly 20th Century Fox has been acquired by Disney). But the one thing that now prevails is the independent filmmaker. We chart our own course against a sea of seemingly endless possibilities and to destinations sometimes unknown.

When I attended the American Film Market this past November presenting First Signal and my other projects, I couldn’t help but think of the ambitions of so many under one roof striving to present their “motion picture” to new civilizations.