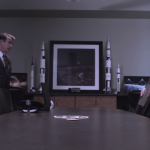 While I remain optimistic for production to begin soon, the reality is that it just takes time to get a project off the ground—especially when you’re looking for investment. When you consider that some very notable films have been in “development hell” for years, you wonder how any film gets produced! I had no idea that the Dallas Buyers Club was written in 1992 and finally released in 2013. Patience is certainly key!

When I think about it, Justice Is Mind sailed along pretty quickly. From short film version to feature was two years. However, from script to screen, First Signal took four years. With First Signal, although we had limited locations in the story, they had to be right. Thus, an extended search. In addition, there were casting and schedule adjustments that also caused some delays. But in the end, the project was completed and released.

Part of First Signal’s release is the continued marketing I employ for the film. In addition to regular social media and pitching for new opportunities, I’m always looking for some interesting angle to capitalize on. Last week I posted a video to First Signal’s IMDb listing titled The UAP Revelation. Created in June for our YouTube channel to coincide with the announcement of the UFO report from the Director of National Intelligence to Congress, the idea was to cross promote the UAP video moment in First Signal with the same moment that was being discussed in the mainstream media.

This weekend I completed up to page 61 of my latest story in the “First World Universe.” With my final pages outlined, I’m hoping for a first draft by the end of October. In all my years of screenwriting I don’t think I’ve ever written a political thriller as complicated and involved as this one. We shall see how it’s received when I start sending it out for reviews and commentary.

As for commentary, a special shout out to Dan and Missy Eaton for producing another successful Military History Expo! From the Civil War through WWII, over 200 living historians (reenactors), three battle reenactments and special guests, brought history to life over this two-day event. It was great to see that nearly 1,000 people attended the festivities. Their expo is a wonderful event to not only learn about military history, but to see it come to life.

In regard to some First Signal trivia, the field you see in the film was the location of the Military History Expo when they produced it in Orange, MA. If you look at the still below, you can see the WWI & WWII trenches that were created for the expo. It was a fitting location for First Signal as part of the story goes back to WWII.