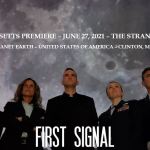 A Civilization Gone with the Wind

This past week First Signal went to picture lock. This is a milestone in any film as it means that we are in the home stretch of post-production. The next steps in the process are color grading and sound mixing. We are still on schedule for a May completion. However, just as I was going to register for The Marché du Film (Cannes), the market was postponed until possibly late June.

Prior to this postponement, film festivals, sporting events, theaters and all forms of gatherings were being cancelled around the world. Countries were closing their borders, entire industries shuttering, tens of millions suddenly out of work. Companies instructing their employees to work from home. Financial markets all but collapsing overnight. The stock market losing trillions every time the bell rang. The military called up. Elected officials instituting never to be believed powers. The Department of Justice looking to suspend Constitutional rights. No, this isn’t a movie this is reality on planet Earth.

The existence and livelihood of 7 billion people is being threatened by a virus that has a worldwide case count of 318,000 and 13,000 deaths. Another statistic that is only now getting discussed is how many have recovered — 96,000.  The question that begs to be asked is how long can this go on before the worldwide economy is permanently broken? A scientist friend remarked to me this week “that a good economy isn’t much good if everyone is sick.” My response was simple, “The sick need a good economy to get better. If we don’t switch it back on, there won’t be the capital to fix this problem.”

Yes, we certainly have some sort of new virus that needs to be sorted. Yes, people will die from it. But equally in the affirmative are the number of people that are recovering. The CDC states that from October – March 38,000,000 had the flu with 17,000,000 doctor visits, 390,000 hospitalizations and 23,000 deaths (these are all on the low end). Odd, I don’t recall the United States and world economy being shut down over this. But for some reason this new virus is going to “overwhelm” our hospitals. Who came up with that narrative? But one thing is a fact, this new virus has brought out the worst in humanity.

I’ve talked to a variety of people around the country and the world. None of them can believe we are in the present situation. We saw how fast governments and elected officials closed the world. We saw how fast the media (particularly cable news) and social media fed this frenzy. We saw how fast they stirred the world population into hysteria. We now see how civil liberties and constitutional guarantees are being threatened. I’m not a conspiracy theorist, but for those of us that think, one does need to question what happened. Why now? What truly is the reason behind this?

For the few I know that have lived through World War II, the country was never like this. Yes, food was rationed, certain products just weren’t available and forget buying a car. But for some reason, this virus calls for a worldwide economic collapse. In general the world, particularly the United States, was enjoying a solid economy with record low unemployment. In a week, that ended.

At some point, hopefully soon, it will need to be decided to switch back on the economy. Because one thing is truly certain, people, companies and governments will run out of cash either during the shutdown or when the unemployment ranks swell into the tens of millions when those less fortunate will need government services such as food and housing just to survive.