Preview(opens in a new tab)

Since my last post, First Signal has been accepted as an official selection in the Bucharest Film Awards and Aasha International Film Festival. To date, this makes eleven festivals that have accepted either the trailer or feature. I have to say I’m very encouraged by these early results. While there’s no guarantee of acceptance to any festival, I remain hopeful that First Signal will continue to be discovered by film festivals around the world.

Although I had planned to start screening First Signal independently of film festivals in October, I have put that plan off until 2021 and will wait and see how the film does during its festival run. Since I’ve submitted to additional festivals over the last few weeks that have a United States or world premiere requirement, any independent screening would jeopardize acceptance.

The theatrical market is the lifeblood of the film industry. While PVOD has demonstrated great promise during the last few months, theatrical is the key to success. Without theatrical, certain types of films either simply won’t get made or will be done so with dramatically reduced budgets. Sadly, some states have enacted the most draconian and restrictive requirements for theatres I’ve ever seen, while some (Los Angeles and New York) aren’t open at all. These types of restrictions do nothing except ruin industries while promoting fear to keep people out of indoor gatherings. I’ve never subscribed to those narratives.

The bright side to all of this is that smart states and countries have very relaxed if not completely opened their economies. They smartly treat citizens like adults and not like children. What this means is the obvious, businesses and creative industries will flock to these destination points. We all know enough now to know what is reasonable about events from the last few months. But, sadly, there are those governments that, for some odd reason, what to keep control of their citizens. Those citizens will simply move as no reasonable person wants to live under any form of totalitarianism.

I continue to remain optimistic that 2021 will return the world to normalcy. Some say the world will never be the same again. Some live in a world of such pessimism that optimism is like a foreign language to them. There are those times you have to look far down the tunnel to see a glimmer of light. But when that light is found, I prefer to be with those that share that destination. Life is too short, to waste on those that want to hold you back in their world of darkness.

While I do some repositioning with First Signal’s marketing plan for the festival market, an idea came to mind the other day for an offshoot story that would focus on one of the characters that is introduced in First Launch. This is a character that I introduced in First World, but never fully explored.  Between my archive and what I have of this character in First Launch, my aim would be to create a stand-alone story that would expand the “First World Universe” and compliment the sequel. 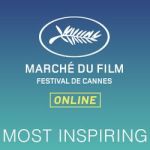 Thousands attended the Marché du Film Online. In a world of uncertainty, the entertainment industry came together to insure the continuation of this worldwide marketplace. Of all the industry events I’ve attended over the years, Marché had the best panels that not only informed on the current state of the industry but demonstrated innovative new business models and predictions for the years to come.

One innovation that ramped up exponentially during the crisis has been the virtual cinema. With the majority of movie theaters closed around the world, some distributors joined with cinemas for a virtual experience. Customers visit their theater’s website and order a movie to view online. The revenue is split between the theater and distributor. With one distributor reporting $700K in sales from 13 movies, the early adopters certainly did well. But as another distributor stated, the early novelty dropped considerably during the last month. With restrictions easing and people going out more, the “stay at home” audiences have drastically changed in numbers.

Another thing that distributors learned during the last few months is that content is truly king. Films that they couldn’t previously sell, suddenly started to sell. With the proliferation of VOD platforms and offerings, new content is critical. Two tech pioneers from the Czech Republic introduced Artinii. A service that screens films in alternative settings (outdoor non-theatrical venues such as a bar or restaurant).

But all this available content on VOD also brought the conversation back to data of who is searching for and watching what. With so much of this data controlled by individual companies, it was discussed that this data should be available to all distributors to give customers what they want regardless of the platform they are watching it on. Proponents said that it would benefit everyone from the distributor to the customer. Opponent VOD platforms want to protect their data to benefit their catalog of offerings. While I understand that the platforms want to protect their own customer data, I have to believe that a neutral third party could hold general data that could be used by the industry to ascertain what’s working and what isn’t. This is why the theatrical experience is critical — distributors know by ticket sales what films are resonating in what market. Needless to say, the data debate will be going on for some time.

The one thing the general public doesn’t know, is the system that brings films to audiences. Imagine the following: films are produced year one, year two they are in post and year three they wind up at a market (AFM, Cannes, etc.). A release date is set, advertising dollars are spent, the marketing and public relations machine goes into overdrive a buzz is generated. Then suddenly, without warning, the theaters shut and all marketing comes to a grinding halt. Honestly, I don’t even want to know the tens, if not hundreds, of millions that have been lost in this industry.

With some theatrical markets just opening and others in the opening planning stages, from what I heard audiences aren’t rushing back. One of the primary issues is that the system is holding back new films as nobody really wants to do a release to near empty theaters. It could also be assumed audiences don’t want to see old releases or they are still concerned about the crisis. There’s also the issue of capacity. With social distancing still employed, who can make any money on capacity limits? How can you plan a theatrical release strategy when reactionary Governors threaten to shut down states again? And, honestly, who wants to sit in a theater with a mask on for three hours? Seriously, how do you eat popcorn? I know I won’t return to a theater until masks are no longer required. Given the amount of information available, they are a prop that has no meaningful benefit in the mainstream. I want my choices of recreation to be enjoyable not overly regulated to satisfy the hysterics. In Canada and the UK they give you a choice. Hopefully, in the United States we will soon have freedom of choice (odd, I thought we did with something called our First Amendment…I digress).

It became quite clear during the market that release windows are rapidly changing between theatrical and VOD.  The customer wants the choice on where, when and how to watch new releases. You might not want to go to a theater and pay $14, but you may pay $19 to watch it on premium VOD at home. Cinema, however, is going to be jammed in 2021 because of the films that are being held back this year. At the end of the day films are financed by distributors in advance…they need a return.

I will say this, theatrical is critical to a movie’s success. This is where substantive revenue is made. This is where substantial press is received. Without some sort of theatrical exposure, a film gets lost among VOD offerings. One of the most thoughtful discussions was how to properly advertise a film on a VOD platform. You can advertise a film as in theaters, but VOD specific advertising is still a nascent possibility. Recognition on the platforms is critical. Just putting a film on them isn’t enough. You need audience engagement and that largely comes from a theatrical release and the media.

A panel I particularly enjoyed was when a well-known producer covered the process of constructing a proper script and presenting the package to the industry (investors, sales agents, etc.). What I loved was her no-nonsense practical approach. This is an industry about continued learning and expanding your network. It’s about meeting and working with new people.

I was generally pleased with how First Signal was received during the Marché. Several sales agents requested a screener and one sent me a deal memo to review yesterday.  In addition to submitting to a variety of festivals with 4th and 1st quarter events, I’m closely monitoring the reopening of theaters and other screening opportunities to plot strategy. Fortunately, First Signal wasn’t “caught” in the crisis from a release point of view. We were still in the fitting out phase.

In the end it was a great job by all concerned. The team behind the Marché du Film, turned the most prestigious film market in the world to a successful virtual event. But as all agreed, virtual markets won’t work for the long term. This is an industry that requires socializing. It requires in person meetings as that is the only way you can really decide if you want to work someone. You can be introduced on a video chat, but the real works starts when you meet in person.