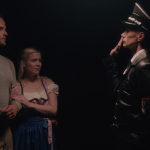 A few months ago I came across a casting notice for a book trailer. The name of the book was Heil Hitler, Herr Göd by A.P. Hofleitner and was based “on true-life memoirs” around a family in occupied Austria at the end of World War II. As this period of history has always been of interest to me, I submitted for the part of Herr Göd.

Shortly after getting cast, I started my research. When we think of the European conflict of World War II, generally we look at Germany and what was going on in Berlin. But how many times do we think of the average family just caught up in it? That was the genesis of the book.

Once I arrived to set I met director Rob Gooding and author/producer “Andy” Hofleitner (who, as fate would have it, I actually met earlier in the parking lot). Andy presented each of the actors and crew a signed copy of his book. It didn’t take long to realize the passion behind this project. Not only are the accounts in the book true, but the family in Austria is Andy’s. The author of the memoirs was his grandfather. The “props” used in the book trailer were the actual ones from the story with one piece signed by Hitler himself. The gravity of the story suddenly became real. To know that you are not only recreating moments in history, but are actually touching it.

A few days after the shoot I started to read the book. From page one Hofleitner brings the reader back in time to a family caught in the crossfire of war. The family is far from idyllic and this is what Hofleitner does so well. His words create real world, conflicted and complicated characters facing the impossible. But through it all they persevere under the most trying of circumstances. Hofleitner’s masterful way of setting up scenes and bringing the characters in had me riveted to the last word. There is an escape scene from a factory that was so brilliantly written it had this reader in the center of the conflict. To know as I was reading each word that each one of these moments really happened, one wonders how such atrocities could have happened in the first place. But they did and that’s why we must never forget lest history be repeated.

For me the most engaging character was Max. His voice from being on the front and witnessing the horrors of the war, brought reality home when he would recount stories in the seemingly quiet village the family resided. Imagine you are sitting in your back yard enjoying a drink and hearing horrors so far away they must be fictional…right? But then, in a moment, the roar of Allied bombers destroy the tranquility of the moment.

Heil Hitler, Herr Göd can be purchased on Amazon. To watch the book trailer, please visit this link.  To learn more about the author A. P. Hofleitner please visit his website here.

Book trailers are a smart marketing tool. To quote from C. Hope Clark’s latest email newsletter, “Whether you are traditional or indie published, it’s about reach, connection, and sales.” And that’s exactly what a book trailer does. It visualizes the story you are about to read.