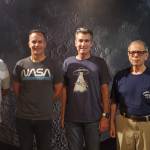 As I approached The McAuliffe-Shepard Discovery Center Friday night for First Signal’s outdoor screening (postponed from July 9 due to weather), I couldn’t help but feel a wave of nostalgia as I got closer. For it was at this location that First Signal began production two years earlier.

After I parked the car, I wandered over to where they were setting up and then soon found myself inside the museum. Naturally, I walked into the room where the majority of filming took place. With the exception of it being set up for some sort of classroom instruction, the room was the same. Oddly, I found myself looking around for the table that we sat the projector on. Why it mattered after we wrapped after two years, who knows! The point being is that it was a nice memory.

Joining me for this screening was Daniel Groom, Director of Photography; Paul Noonan, General John Reager and Yefim Somin, President Sergei Tupolov. I hadn’t seen Yefim since we wrapped at the Discovery Center two years ago. It was good to catch up with everyone and reminisce a bit. When you’re making a film, it’s almost impossible to predict where it will end up after it’s completed. Having First Signal screen where we filmed it made for a great evening. My thanks to the Discovery Center for making it possible, to those that attended and to Senator Shaheen for her words of support.

After the screening I was talking about a new story in The First World Universe that came to me about a week ago. I have the name, logline and even the ending. Without giving away too much at this stage, think All the President’s Men meets Defense of the Realm.  The story centers around the following line that Elisabeth Seward, the National Security Advisor, says in First Signal, “But there will be a record of this meeting. Simply put there is a hole in the President’s schedule because she is here. How long do you think it will take before some intrepid reporter asks questions that I’m just going to guess you don’t want answered?” If all goes well, I’ll have a draft completed by the end of the year.

Yesterday I posted the last installment of First Signal’s actor interviews. Having rewatched each installment for social media and posting purposes, I have to say we covered a lot of ground. Sure, we talked about the process of creating First Signal, but it was the discussions that centered around the entertainment industry, the craft of acting and directing along with the contemporary issues of the times we are in, that I really believe gives the series legs.

As First Signal enters the next phase of marketing and distribution, it’s time to look forward to bring new projects to life. 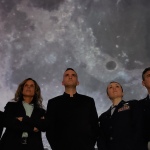 It’s hard to believe that First Signal is nearly at the halfway mark in principal photography. The dedication of the actors, crew and staff at the McAuliffe-Shepard Discovery Center has been unprecedented. Producing a feature film is no easy task but when you work with a dedicated group of professionals, the process doesn’t actually seem like work.  Of course the one thing I won’t do is get complacent. There’s still several weekends left of filming with half of them being outdoors.

Along with principal photography, our public relations efforts are also well underway with our first press release announcing First Signal (click this link).  I’m also delighted to report that The Hippo published a great article this week about our filming at the McAuliffe-Shepard Discovery Center. The Hippo does a wonderful job with their Q&A formats.

Now that we’ve had some press, I’ll be reaching out to the distributors and sales agents that I met at the American Film Market (AFM) this past November, particularly those that expressed an interest in First Signal. As AFM is all about planning, it’s never too early to start conversations about projects in production.

One of the next steps in the process is how the film will look from a color point of view. It’s something I need to start thinking about as we will soon be releasing stills. While it’s a process that shouldn’t be rushed, it shouldn’t be delayed either. Like the building up towards the release of the first trailer, I believe the releasing of stills should be given equal weight.  As they say, a picture is worth a thousand words.

With principal photography resuming next weekend, Daniel Groom (Director of Photography) and I will be doing some test photography tomorrow in a field. This location encompasses the last scenes of the film. While the scenes we are shooting indoors are obviously important, the outdoor scenes will be involving a substantial amount of special effect work in post-production.

Although the making of a feature film takes quite a bit of work while you’re on set, that doesn’t mean that we don’t have moments of frivolity. From Patience McStravick (Major Sampson) and Conor Timmis (Cedric Yonah) in a Space Shuttle simulator to a birthday celebration for Daniel Groom. One of the highlights from last weekend was when Sarah Beattie, who works at the Discovery Center as an educator, treated us to a wonderful planetarium show about the constellations. I never knew there were so many! But what was very touching to me, was this lovely blog post that she wrote last week.

For me there is truly no more rewarding of a process than seeing a film come together. It is a form of art like no other. Long after I call the last “cut” this film will live on forever. A film is a testament to the dedication of so many to realize a vision. When you watch a film and see the credits role know that every person, company and location played a vital part in its creation. While the adage for actors is “there are no small parts” that also holds true to those that sit behind the camera.  As I conclude this blog post, I want to say a special thank you to Patience, Dan, Sarah and Linds for believing in First Signal.