The final days leading up to principal photography are ones that give the word “multitasking” a whole new meaning. Throw in a last minute casting and that brings it to a new dimension.  But as I look at my lists, what I’m crossing off and what we have left to do, things are moving along.

I’m also pleased to announce that Wendy Hartman will play President Helen Colton in First Signal. Although I’ve known of Wendy’s work for some time, we haven’t had the opportunity to work together. But the one thing I have admired is her dedication to any project she becomes a part of. Welcome Madam President!

It would have been too easy to throw the towel in when I received the news that someone was pulling out this close to the start of production, but I have never been one to throw a towel. When you reach a certain point in this process you just double down and pursue all avenues.

After the auditions in Nashua I drove up to the McAuliffe-Shepard Discovery Center for a last minute location check. Our first day of shooting will involve just two locations, but it’s those last minute looks that are important. While visiting I had the most fascinating conversations with a few of the staffers about all things science and science fiction. They showed me some of the new shows in the planetarium. Every time I visit the Center I “discover” something new.

One area art direction I did some work on this past week was having Belgian license plates created for the first scenes we are shooting. I believe in authenticity and making every effort to get it right. A special thanks to Adam Starr for creating the plates and to my friends at FedexOffice for bringing them to life.

With some final fittings this week and picking up the tailored Air Force Uniforms, First Signal will soon be filming.

From when I started writing the script in 2017 to where we are today, I think of the journey and dedication of so many to see this project through. I can’t help but be reminded of when I started to put this “First World” universe together back in 2006 with the screenplay First World, to the short film version in 2007 to a near greenlight of the feature film version in 2008 until the economy crashed. It was from my writings in First World that the genesis for Justice Is Mind was born. That project seemed a lifetime ago until I was driving home yesterday and actually drove by one of the restaurant locations in New Hampshire we used in that film.

I believe this quote from Theodore Roosevelt sums up what many of us feel in this industry when a project finally moves forward after years in development –  “Nothing in the world is worth having or worth doing unless it means effort, pain, difficulty… I have never in my life envied a human being who led an easy life. I have envied a great many people who led difficult lives and led them well.” 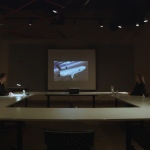 No sooner did we finish our first pre-production test on January 26 at the McAuliffe-Shepard Discovery Center did we plan our second one for March 4. This was going to be more than a handful of shots and walkthrough. Our second test would involve lighting, sound and set construction.

I believe pre-production is the most important aspect of planning a film. It is this phase where even the slightest detail gets ironed out. How does the set look? Is the audio clear? What lens will work best for this shot? Because before you know it, the first day of production has arrived and you can only hope you covered all your bases.

When we first arrived, the main room we were going to shoot in was empty like a clean slate. One by one we brought the tables in and configured them to the set I had envisioned. There is that surreal experience as a screenwriter when you see a set coming to life that until that moment has only existed as words on a page.

One other critical component to our test was in camera special effects. So often in our modern world of filmmaking when we see a screen or monitor in a movie it’s shot with the actors without an image. The image, or special effect, is then put in during the post-production process. That was largely the case with Justice Is Mind when all 170 special effects were put in during post-production. In camera special effects for Justice wouldn’t have been practical as the majority had to be custom designed. For First Signal, the presentation that takes place during the primary scene is largely a slide presentation of still images. Thankfully that portion of the test was successful.

When we go into production I want the actors to actually look at something real. Not only does it help them get into the moment of their character, but it greatly assists with eyeline and saves an enormous amount of time in post-production. There is also something authentic about the lighting from a projector that can be used to enhance a particular character or moment.

The idea for doing in-camera special effects for this scene came from the movie Fail Safe. In the scenes at the Pentagon the image we see is rear projection. But in the command center it’s actually front projection. I can only imagine what the pre-production process was like on that film never mind the timing the actors and crew had to accomplish on set as that effect was film not a still image.

With our interior work completed we moved outside for a combination of drone and ground based photography. This is the scene where one of the major characters arrives at a “military base.” I’ve previously taken drone footage of the Discovery Center, but this was my first time tracking a vehicle. It’s all about practice!

Suffice to say First Signal’s second test went great. None of this would have been possible without the expertise and dedication of Daniel Groom, the Director of Photography; Patience McStravick, one of the producers who stars as Major Sampson and Paul Noonan who stars as General Reager. And a special thanks to the McAuliffe-Shepard Discovery Center. To turn their phrase, thank you for having us in your “universe.”

As we plan for an end of April start date with one dress rehearsal prior, some critical components of the production started to arrive this week…