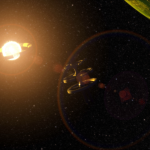 With post-production on First Signal coming to an end, it seemed fitting that I finished a draft of the sequel early last week. Titled First Launch, the story picks up two years after events in First Signal.  While First Signal introduced the First World Universe in a very contained environment, First Launch is entirely the opposite. With the majority of primary characters returning, the logline “The President faces a military coup and extrasolar war when a covertly built second generation space shuttle reveals a worldwide military destined to confront an alien presence on Earth,” sets the story shortly before the 2016 Presidential election.

While I’m glad to have finished a draft to the sequel of First Signal, my priority is to see that First Signal properly exits post-production as I plan for general marketing and distribution. As for distribution, this past week I was approached by a theater to have First Signal screen in July. While I normally would have jumped at the opportunity, I honestly can’t commit one way or another until we learn when restrictions are being lifted. I do know one thing, so long as mask requirements (something I vehemently disagree with) are order of the day there’s no point, or joy, in having a theatrical screening. While our governor may employ Orwellian powers in Massachusetts, he has no power or jurisdiction of its citizens outside this tiny state. Thus, I’m looking at screening opportunities outside of New England and the country.

I am, however, considering “attending” the virtual Cannes Marché du Film in June. As the fees are negligible, it certainly doesn’t hurt to try and see what comes of it. There’s no question that by the end of the summer, theaters worldwide will be open and the markets will endeavor to return to some sort of normalcy.

While the large theater chains can tap into a variety of reserves and credit lines, it’s the independent theaters that are most at risk during these perilous times. As their only source of revenue are ticket sales, the real concern in the industry is that some of them just won’t make it and that a vital link for independent films will simply disappear. Unless you have a robust concession, ticket sales alone just don’t carry theaters. Simply, the box office percentage that’s shared with the distributor just varies too greatly between films.

But with every economic upheaval, there is always a revelation of something new or in this case a return. How many of us remember drive-in movie theaters? I remember the days when we would all pile into the car, drive up to a parking spot, place a speaker on the side of the car and watch a film unfold on a giant screen. It’s no surprise, that moviegoers are starting to look at the drive-in as a solid alternative while the traditional theatrical experience is sorted.