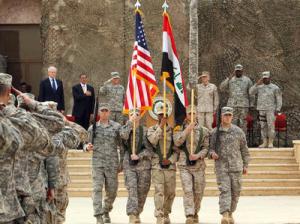 I remember where I was in March 2003 when the United States and United Kingdom declared war on Iraq and the dictatorship of Saddam Hussein – Washington, DC.  At the time I was publisher of International Figure Skating magazine and was attending the World Figure Skating Championships. I was also promoting my first book Frozen Assets. When one media opportunity after another was cancelled and news of war filled the airwaves, our world was changing – again.

To be sure, since September 11, 2001, America was living in a paranoid state. Our once genteel existence, long protected by two massive oceans, was compromised. Our feeling of “homeland” security shattered. Nobody attacks

the United States of America and we were going to do whatever it took to regain our stature. Indeed, we had that right. America saved this world on no less than three occasions with World War I, World War II and The Cold War. As the last remaining superpower on this planet we were not going to be defeated by a handful of terrorists be they domestic or international.

But with great power, comes great responsibility. And while most Americans wanted to restore pride, there were those in power that rode this wave of paranoia to a state that nearly destroyed the ideals this country was founded on and was fighting for on the other side of the world – democracy. A dictator long past once said “The art of leadership… consists in consolidating the attention of the people against a single adversary and taking care that nothing will split up that attention.” Left unchecked, history has a terrifying way of repeating itself. Thankfully, we elect our Presidents for a maximum of eight years.

There’s no question that Iraq had to be handled. Hussein had to be removed from power. The no fly zone established after the Gulf War made sense at the time, but was nothing more than a band aid on a greater problem in the region. Iraq was a pressure cooker and was going to implode at some point anyway. As we have seen this past year across the Middle East, revolutions are toppling backward regimes with nascent democracies coming to fruition. In time, the same probably would have happened to Iraq.

old, seeking to bring democracy to a country and a region that is known as the Cradle of Civilization with its origins dating to the 6th millennium BC.

Iraq occupies a significant amount of land referred to in ancient times as Mesopotamia. Sumerian, the earliest written language was founded in this region, along with advances in mathematics and astronomy. For it was the Babylonians that first observed the motions of the planet Venus in the 2nd millennium BC. Yet, four thousand years later, the United States Mariner 2 was the first space probe to reach that planet.

Although the Iraq Museum and several ancient sites were badly looted during the war, with the United States taking some heavy criticism on their failure to protect the treasures of this ancient land, I have to hope that someone somewhere postulated that there is a global responsibility to protect and restore this region.

In this modern world, all sovereign nations have the right to govern themselves. This past week, with the United States formally ending the Iraq War, we turn a new leaf towards the future. As we thank our military for not only ridding this world of a dictator, but for bringing hope to a region that gave birth to civilization on this great planet, we know there is some frame of order to America’s actions over the last eight years with history being the final judge.

But to those Americans and Iraqis that perished in defense of freedom, they have not died in vain. Indeed, their heroic steps of yesterday mark giant leaps for mankind on this planet and beyond.

This entry was posted on December 17, 2011 by markashtonlund. It was filed under General, News, Politics and was tagged with Democracy, Iraq, Mesopotamia, Middle East, United States, War.