The Renaissance Court at the Worcester Art Museum

It was 1985 and my first trip out of the country was to England. I don’t remember what my first tourist stop was on that trip, but one destination was the British Museum. For me, I’ve always been drawn to the “old masters” – the works of Leonardo da Vinci and the like.  There’s something about the imagery and stories those paintings tell. Whenever I travel I always endeavor to find a museum. But sometimes one does not need to board a plane to discover works of art. Here in Worcester, MA we have quite a jewel of our own – the Worcester Art Museum. 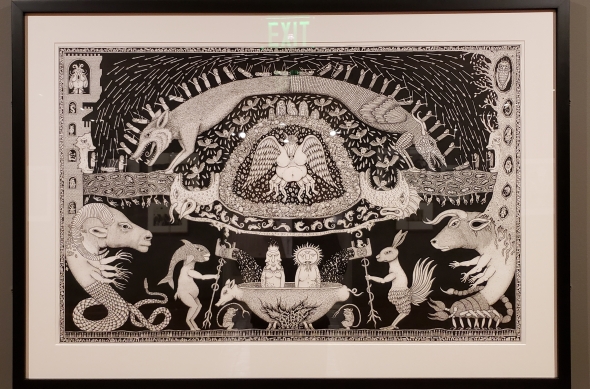 The work of James Dye

My mother enrolled me in a variety of art classes at the museum when I was growing up. I cannot stress the importance of being introduced to art, music or any other creative endeavor at a young age. Since those early days of mine, my mother has enrolled her great granddaughter in some classes at the museum.  While I may be a bit biased towards a family member, I’ll just say that Julie is beyond gifted when it comes to creating original art. She’s also quite the storyteller with some videos she has made.

My mother and I both celebrated our birthdays this past week. The last few years I have started a trend of visiting a museum on mine. I hadn’t been to the Worcester Art Museum in years. In fact, I can’t remember the last time I even visited. But no sooner did I walk in and I saw some familiar exhibits from days long past. That’s what I love about museums, they understand the past while presenting the moment.

The Remastered: A New Look at Old Masters exhibition

I’ve never been a fan of contemporary art. I personally find it pointless and without meaning and effort. Taking a white canvas and literally throwing paint at it, isn’t art in my book it’s just a waste of good paint. Or, to quote Nigel Bruce as Major Giles Lacy in Rebecca, “Not this modern stuff I hope. You know, turn a lampshade upside down to represent the soul in torment.” But that doesn’t mean one isn’t open to discovering new artists.

I discovered the work of James Dye this week. The moment I laid eyes on his works I found myself just staring at them. From the detail to the construction of his story to the messaging within, I’ve never seen an artist represent so much in a print. It is the type of work that will speak differently to every person that looks at it. Certainly Dye has his own message to accomplish, but it’s clear that the artist wants us to form our own representation of the work.

To quote from the Worcester Art Museum, “Through ink, James explores the ritual nature of art and the symbiosis of image and story. He draws inspiration from mythology both personal and established to create works that speak to the imagination”.  There’s no doubt in my mind that a film could be created off one of Dye’s works.  From what I learned he was partially inspired by the artist William Blake.  In the movie Red Dragon, the character of Francis Dolarhyde is taken with the Blake painting The Great Red Dragon and the Woman Clothed in Sun.

But the world of film is where I will be concentrating this week as pre-production continues for First Signal.

My mother Eleanor (r) with her cousin Lynne. We were celebrating her 80th birthday at Lynne’s house in Dennis. My first film First World was filmed here in 2006.