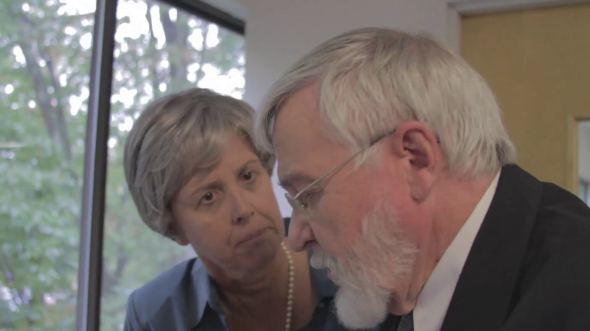 Maria Miller consoles her husband Joseph at the courthouse.

With Justice Is Mind now edited in a rough cut up to the 1.25 hour mark, there is nothing more satisfying as a filmmaker than to see the story come together visually. Oh sure, I wrote the script and the film has been shot, but seeing it in action brings the project to another level of reality – a completion date.

Having now set an internal completion date that I believe is achievable the process now turns to what film festivals to submit to. Of course every filmmaker wants to see their work accepted to a festival. There is a certain pride knowing that your work has been reviewed and approved by your peers. Unfortunately, simply owing to the volume of submissions to even the smallest of festivals there is simply no guarantee that it will be accepted.  With Sundance receiving over 4,000 submissions and screening just over 2%, the chances are slim that such a high-profile festival will accept your film. But honestly, you never know.

The one thing I do know is that you can’t put all your eggs into one basket by submitting only to festivals and then waiting to see if you’re accepted. First, the majority aren’t buyers markets so aside for some public relations and resume accolades, you still don’t have a distribution deal for your film. That’s why in addition to presenting Justice to sales agents and distributors the fallback plan is self-distribution for theatrical, DVD, VOD, digital streaming, TV, etc. The military isn’t the only industry that understands preparedness. Seriously what’s the alternative, have a film sit on a shelf waiting for the phone to ring? There’s a reason why I post to this blog, send press releases, email newsletters and have an active social media plan, because if I was a distributor and was considering Justice I would simply do a Google search on “Justice Is Mind” movie and when over 300,000 entries come up I  figure that just gives our film a bit more of a bump in awareness for a deal.

Henri’s kindergarten teacher Helen Granger meets with Margaret Miller and shares a story from Henri’s past.

But whether we are accepted or not to a festival like Sundance, there’s a lot we can take away. It’s been revealed yet again that big name stars don’t translate to big prices or even sales. This has been a consistent trend that I just believes come down to the story…you have to have one. And while certain buys for all rights deals were in the $2-3 million range, reports still say that investors are losing money. Look, I understand the distributor secures rights for the $2-3 million and then commits another say $20 million in prints and advertising, but haven’t we learned anything from the economic meltdown!  Why are producers still overpaying for talent. Don’t you want to go back to your investors for your next film? I personally know of one film that was produced in 2008 with nearly $2 million in equity financing with some well-known talent. It was only accepted to Tribeca and never received a distribution deal of any note. I saw it in the $5 bin at Wal-Mart last year. It’s one thing taking a bath on an investment, it’s another to go down on the Titanic.

A film like Justice really isn’t any different except in the numbers. I believe we wouldn’t have secured the talent on both sides of the camera or the locations and sponsors if they didn’t believe in the story and see the possibilities. And what did my investors want to know? They wanted to enjoy the script and to see a business plan with a reasonable return on investment at some point. Imagine.

And while there are economics that sometimes dictate a high-profile name to sell a project, I’d rather see an actor on-screen who I’ve never heard of but delivers a performance of believability and substance. I still believe filmmaking is about telling a story and that word of mouth is still the best advertising you can’t buy. 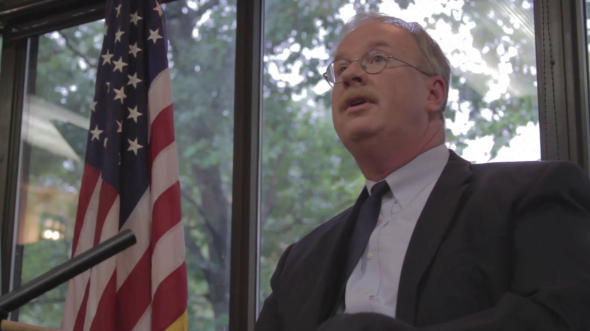 The police detective on the witness stand.

This entry was posted on January 27, 2013 by markashtonlund. It was filed under General, Justice is Mind and was tagged with distribution, film festivals, Justice is Mind, Sundance.