It’s Time To Partner With China

China’s ambitious space program and military development seemed to have caught some countries, including the United States, by surprise. Why, I don’t know. I wasn’t surprised at all to read that President Obama would be interested in partnering with China on a manned mission to Mars. Frankly, I don’t see one nation (never mind a commercial space company) pulling it off in the economic climate of the early 21st century. From a technology point of view, NASA could certainly put man on Mars. But the International Space Station proved that partnering is the way to go. It just makes sense from a cost sharing and technology point of view.

(although, I read that they wanted to be involved). This lack of participation has only solidified their resolve to build their own space station called Tiangong-1. To quote a NASA official in the article it’s a “potent political symbol.” I respectively disagree on that point. It’s time to put politics aside and look at the greater good. Trust me, if China develops an economical launch system the international commercial contracts will fast come their way.

When I was developing First World, my research revealed some mentions that China was hoping to achieve a manned mission to the Moon by 2020. In looking to apply some plausibility to the First World story, I theorized that China could possibly accomplish this goal by 2018 if they were motivated to accelerate their efforts if their sovereignty was threatened. That threat being their discovery, during the Beijing Olympics, that a unified covert military insurgency was operating in most of the world’s military organizations.

As I begin to write Synedrion this weekend, the sequel to Covenant, readers will

be introduced to President Robert Anderson who discovers, not only the classified missions of the Apollo space program, but the fact that a large part of this military insurgency lies within United States Armed Services – a realization that propels cooperation between China and the United States on a global and off-world scale. 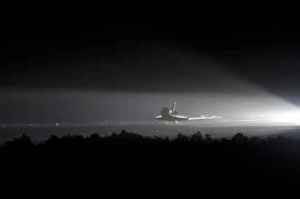 Finally, we welcome home the space shuttle Endeavour after a fantastic mission to the International Space Station. And back to the science fiction front, I’m really looking forward to X-MEN: First Class this weekend.