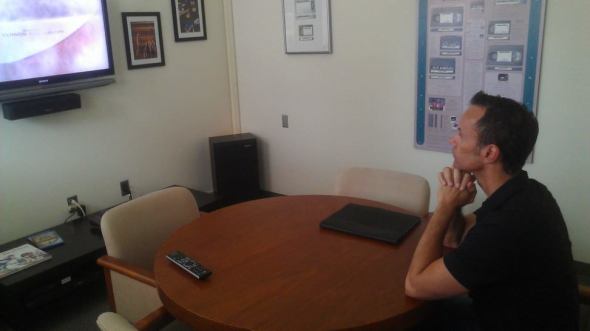 In the entire history of this production, this past week had to be the most anxious and exciting at the same time. I am a person who is organized by lists in various stages of priority. At the top of the list was one line marked on either side by asterisk **FILE & DVD**. Translation—Justice Is Mind was being exported this week to produce our exhibition DVDs. Not only for our world premiere on August 18 but for key presentations to studios and distributors.

Throughout the final weeks of post-production, I have learned things like “phasing” “time code” and “frame rate”. I promise you, I will be working some of this new found technical knowledge into my next screenplay. There were more than a few moments when I simply wanted to say, “Mr. Scott, we need warp drive as soon as possible.”  But like that scene from Star Trek: The Motion Picture, the last thing we wanted at this stage was to leave at the speed of light only to encounter a wormhole. 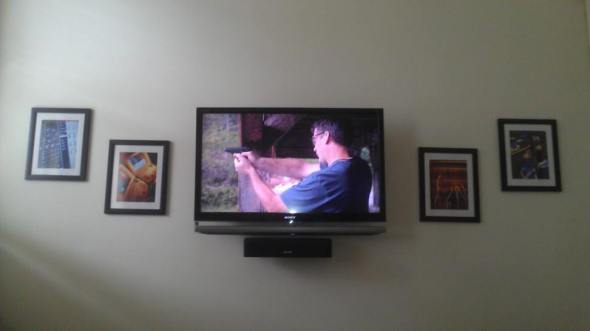 Vernon Aldershoff as Henri Miller in the opening scene.

And so it was early Thursday morning that the final export of Justice Is Mind came through for me to review.  Seriously, anxious doesn’t even begin to describe what I was feeling. This was my final review before exporting the film to DVD.  I started to watch Justice at about 5 AM and after seeing the brilliant color correction that was now in place (and this was a lo-res version) the film simply took on a feeling of completion. I sent a text to our editor “everything looked great!”

Anticipating that everything was fine, our editor arrived in Boston at the production company that was going to produce the exhibition DVDs.  His texts started to come through “waiting for the whole file to transfer” and then “we’re good on the transfer”. By noon I received the email from the production company, “The test DVD is all set.” And this was it, the moment we have all been waiting for. I was going into Boston to review the first 10 min of Justice on DVD.

The exhibition DVDs of Justice Is Mind.

As I drove into Boston, naturally, I couldn’t help but reflect on the last few years.  All the work, the worry, the meetings, the presentations—but this is what we have all been striving for. I parked the car at Copley (forget trying to find on street parking in Boston!) and before I knew it I was sitting in a small conference room at Video Express on Newbury Street. When our production contact hit play on the DVD and I saw the resolution of the film come to life “on screen” I was simply stunned. Yes, like a kid in a candy store taking as many samples as possible, I began to snap pictures of the wall monitor. And so approving the file I drove home only to return the next day in a torrential downpour (and a couple of hydroplane moments) to pick up the completed film.  A little New England weather wasn’t going to stop me!

And so today, I cross off various lines on my priority list. Until the next iteration of file transfer to our distributors, Justice Is Mind is complete.

While I plan to say some opening remarks next Sunday at our world premiere, I will also thank our post production team here. First and foremost our editor Jared Skolnick for a masterful job of bringing Justice to life in the “editing room” and the countless tasks and responsibilities that went with that. Jeremy Blaiklock our director of photography and for his brilliant color correction.  Adam Starr our special effects supervisor for his unique VFX creations. Daniel Elek-Diamanta for an original score that’s on par with the great film composers.  Last, but most certainly not least, Timothy McHugh and his team at Visionary Sound for a sound mix that adds that final bit of quality so necessary in film.

The world premiere of Justice Is Mind – Sunday, August 18, 2013 at The Palace Theatre in Albany, NY.