For those that follow me on Facebook and Twitter there is nothing unusual about me offering a one word status update “writing”.  It usually happens on weekends when I write this blog, but it was primarily for a new screenplay I was writing through a good part of 2013 and early this year. With Justice Is Mind in theatrical release, an idea suddenly came to me about an idea for a political thriller. It was the same for Justice Is Mind when I was working on First World. The idea just happens and then before I know it, I fire up Final Draft and start writing.

I am pleased to present the political thriller SOS United States – A visit by the Prime Minister turns into a political crisis when the President learns that a nuclear bomb is on an ocean liner heading to Boston.

Inspired by the Cold War political thrillers Fail Safe and Seven Days in May with the contemporary pacing of Clear and Present Danger, I have always enjoyed this genre of film that revolves around government conspiracies, intrigue and deception. Another one to add to this would be Advise and Consent.

With SOS United States announced, my efforts begin in earnest to raise the capital to produce the film ($300,000). This isn’t a project that I plan to shop around to option, this is a film that I plan to direct. That being said, it all starts with the concept poster. The poster you see here was designed by the talented Jestyn Flores of Pixel Eight Design. I met Jestyn through Shannon McNamara. Shannon plays the court clerk in Justice Is Mind. Yes, it is a small world!

But while all this was going on, there was something else I was waiting for—another review of Justice Is Mind was scheduled to publish on Saturday night. While I was working on the closed captions file for our VOD distributor (Kinonation), this coming review was top of mind. With our VOD release coming up, along with our international premiere, the goal, naturally, is to secure positive press. After I finished the closed captions file (Zencaptions is great!) and uploaded it to Kinonation I went over to the reviewers website and there it was. 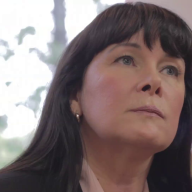 “It’s Mark Lund’s writing that makes these interactions what they are, for there is so much intelligence in the dialogue.” When I read this part of Angeliki Coconi’s review of Justice Is Mind on Unsung Films there was a moment when I almost started to cry. Yes, for all the Swedish stoicism I project, it’s my French half that takes over in moments like this. There is nothing more satisfying than having your work acknowledged. But in addition to my work, I always like when a reviewer calls out actors for their performances. In the case of this review it was Kim Gordon (District Attorney Constance Smith), Paul Lussier (Henri Miller’s lawyer) and Carlyne Fournier (Dr. Eve Pullman). When I think of the hours they put in to develop and prepare these very involved, and dialogue heavy, characters, I just want to thank them again (and all the actors and crew) for making Justice Is Mind possible.

When I think of the hours, days, weeks and months I have sat behind a computer writing, researching, re-writing, printing, presenting, etc., reviews from Frisco Kid, The Barnstable Patriot and now Unsung Films, makes this process all the more worthwhile. But it has been the local press that has fired up interest in the film, from the Spencer New Leader to Worcester Magazine to the Nashua Telegraph, which brings audiences into buildings that translate to word of mouth, social media, etc. It’s all part the plan to present Justice Is Mind and now SOS United States to the widest possible audience.

Of course, I am not so taken with our accomplishments to date to know that there will not be some difficult navigating down the road. Indeed, for all the red carpets, there are those business issues I’ve had to deal with along the way (some not so pleasant). There will be those that love what you do and there will be the detractors. Indeed it can get very hot in the kitchen, but that just means that something is cooking.

This entry was posted on June 1, 2014 by markashtonlund. It was filed under General, Justice is Mind, News and was tagged with Angeliki Coconi, Clear and Present Danger, Fail Safe, First World, Justice is Mind, political thriller, Seven Days in May, SOS United States, Unsung Films, video on demand.