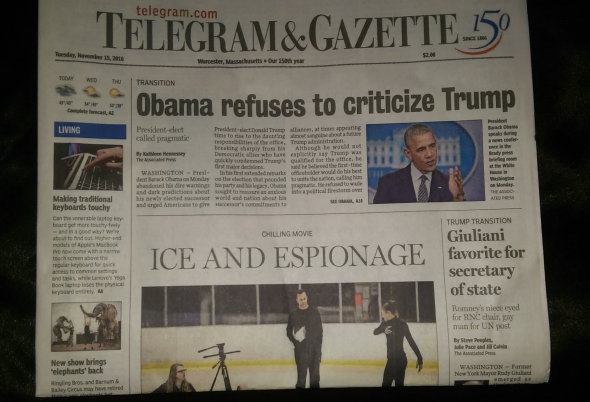 Ice and Espionage. That was the title of the article about Serpentine that appeared on the cover this week of the Worcester Telegram & Gazette.  While so much of our media is consumed online, there is nothing like a printed newspaper.

It was last Monday when I started to get Google Alerts that the article that ran the previous week in the MetroWest Daily News had been picked up by the Associated Press. The article was published by outlets all over the United States. But seeing it “above the fold” on the front cover of a newspaper was not only particularly special but important for our promotional efforts. 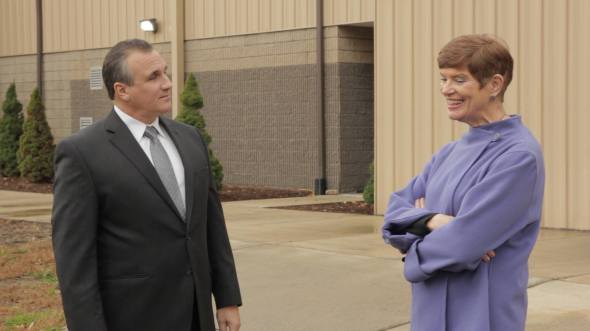 Paul Lussier as Philip Harrison, a mysterious sponsor, and Kim Gordon as Marlene Baxter, the President of the American Figure Skating Federation, in Serpentine.

In as much as I am a filmmaker, I’m a marketer. As I’ve stated before, it doesn’t matter what you’re doing if nobody knows about it. I’ve often used the word herculean to describe the process of making a film. The same thing can be said about securing press. It’s one thing  after a film is released, but at this early stage of Serpentine it’s even more welcome to promote the overall concept of the film – the sport of figure skating meets the Cold War.

As a former magazine publisher, I can see why they wanted some counter editorial on the cover. But coverage that worked from a reader interest point of view. Considering the political atmosphere in the United States that has polarized both sides, it makes sense to bring to readers an interesting project that just happens to have government intrigue in its storyline. It also lends credence to the fact, that figure skating, despite its challenges in the ratings over the last decade, still holds interest by general audiences. I saw this first hand at the World Figure Skating Championships in Boston and there are more than a few figure skating films and TV projects in development (I, Tonya anyone?). 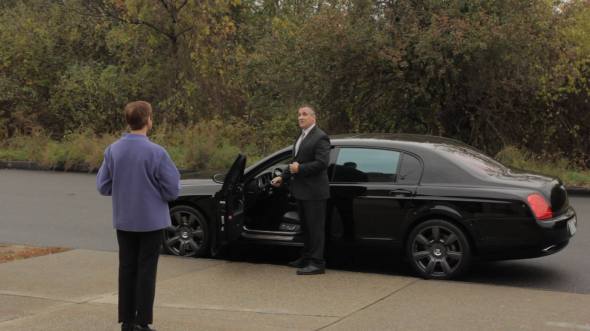 Philip Harrison’s Bentley was supplied to the production by Foley Motorsports of Shrewsbury, MA

Of course the next steps to bring Serpentine to life is the post-production process. Having handed over the hard drive to our editor, conversations with our special effects supervisor and listening to score elements by our composer, the process is moving along nicely. Our aim is for a mid-February 2017 release on Amazon Prime along with select theatrical performances and promotion.

Regarding Amazon, it looks like they will soon be taking the route of Netflix as they seek to roll out their service in 200 countries. Obviously, as a filmmaker, this comes as great news. Since my films went up on all of Amazon’s platforms the exposure and viewership has increased substantially. And unlike some VOD services, Amazon pays filmmakers on every transaction. It’s a business model that works for all concerned. For the consumer they make the choice of what to watch without someone acting as a curator. For the filmmaker it offers an opportunity to showcase your hard work to a global audience. Honestly, there’s no point in doing this if it’s just going to sit on a shelf!

The post production process is one of organization and creativity. Take for example our composer Daniel Elek-Diamanta. Like his efforts on Justice Is Mind, he starts before he has seen one second of footage. Our collaboration begins with conversations about the story and the general atmosphere. He so hit the target the other day that I placed his score with some of the footage to see how it would work. Suffice to say, it brought Serpentine to life and will probably be the general theme of the film.