The Video on Demand Premiere 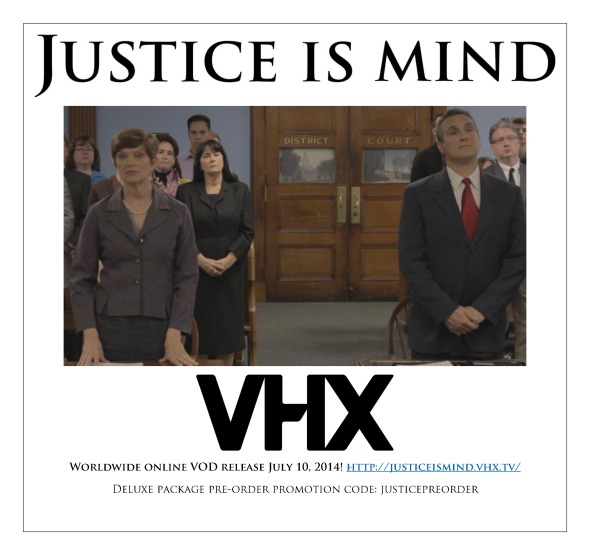 I have often posted about my background in publishing and how it relates so well to my work as a filmmaker. When publishing was a robust industry that lived in print, the pitch process to raise capital to launch a new magazine pretty much mirrors how it’s done today in the independent film industry. You’ve written a script, have a business plan and spend a good deal of money printing both to present. But two areas I have paid obsessive attention to is the migration of print to online and consumer marketing. Just like publishing, this is the present world of filmmaking.

I’m pleased to announce that on Thursday, July 10, 2014 Justice Is Mind will have its video on demand premiere on VHX!  Please visit our site at this link or visit us on our primary website for a special discount. Our Deluxe Package is akin to a DVD with numerous special features.

While Justice Is Mind will roll out on other mainline VOD platforms very shortly, it’s important that we have at least one “direct” VOD platform. As I used to sell magazine subscriptions directly off our website, we also had subscription agents that sold for us. You want both, because you want to be everywhere.  I used to publish niche magazines in the sports and collectibles markets, is filmmaking really any different? I have a product and I need to develop as much conversation as possible. I also need to make it accessible in whatever manner a consumer wants to buy it. Whether it’s direct on VHX or on another mainline platform, a sale is a sale.

VHX is by far, in my view, the best direct VOD platform from a filmmaker and consumer point of view. The beauty is in the “storefront” of web design that makes it not only easy for consumers to navigate, but as a filmmaker the marketing tools they give you to bring your film to the world are light years ahead of the others. I strongly suspect in their business plan someone had a publishing background or at least worked in direct response. And here’s another plus, excellent customer service.  As filmmakers we all know there are a ton of new online services from VOD, to theatrical crowdsourcing, to crowdfunding—the difference is in customer service.

When I produced First World in 2006 (released in 2007), the idea then (as now) was to present a short film version of the feature to interest investors. As I followed that plan, I also learned of science fiction conventions around the world that wanted to screen the film. I also learned of CreateSpace (through Withoutabox) to sell our film online and on DVD. To this day (actually yesterday) I still get a monthly payment for that film.

With Justice Is Mind’s International Premiere on October 29, 2014 on the Queen Elizabeth, our Video on Demand premiere set on VHX for July 10, 2014 and other screening opportunities and VOD platforms coming online, this course has enabled me to set sail with a new project – SOS United States.  And like I continue to do with First World, the process of getting SOS United States into production will just mean arriving at the right port of call. There’s a port for every film, it’s just a matter of navigation and setting a course.

Yes, this is an exciting time for filmmakers.  The studio system is gone and thankfully the days of the gatekeepers are numbered. We now live in an age of consumer demand and wants. As filmmakers we are only limited by the creativity of our marketing plans.

In SOS United States the Skylon plays a part in the story.