Unless you are living under the proverbial rock, all of us involved in the industry are paying close attention to Cannes. For me, I’m always interested in the business of distribution and marketing because at the end of the day you have to get your film seen.  With VOD distribution all the rage, there’s no wonder that Netflix’s Ted Sarandos is being so widely quoted—and rightly so.

As I’ve mentioned in some previous posts, on any given week there are numerous things I try to accomplish for my projects. From pitching, to writing, to editing, to marketing, there’s always something going on.  But this week, things jumped ahead.

Justice Is Mind will soon arrive on additional VOD platforms with the sequel In Mind We Trust in development.

With Justice Is Mind successfully distributed, my attention has largely turned to my current slate of projects with First World, SOS United States and In Mind We Trust. While I continue to market Justice Is Mind on a daily basis, the goal is to secure the necessary partnerships to bring the next project forward. That goal took several steps forward this week with a great Skype meeting with a producer and his team in the United Kingdom.  From my days in publishing, to our recent partnership with Cunard Line for the international premiere of Justice Is Mind on the Queen Elizabeth, I’ve always enjoyed working with colleagues “across the pond”.

The one thing any filmmaker will tell you is that this is an industry of partnerships and collaboration. From the actors, crew, location, marketing and distribution partners, over two hundred people from two countries were involved in Justice Is Mind. For good reason, I keep in touch with most of them. One of those reasons is a new project I’m working on.

My friend Alberto Mercado is a published author and a wonderful photographer. Al photographed Justice Is Mind’s screenings in Sturbridge and Millbury. His photos were such a hit they soon started to show up as headshots on IMDB and Facebook. 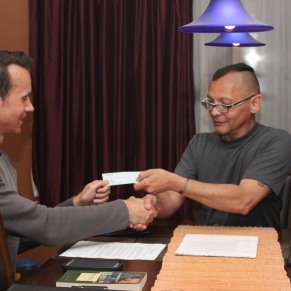 A few weeks ago at a party at his house we started talking about the “mechanics” of filmmaking. The conversation was not dissimilar to one I had with my investors in Justice Is Mind back in 2012.  Al wanted to see one of his books made into a motion picture. He attended several of Justice Is Mind’s theatrical screenings, including my short film Evidence, so he knew what my capabilities were. But was there a story? Indeed there was. A great story. One that I wanted to tell.

Oddly enough, Al thought I was reading his book A Rose for Essie Mae when in fact I was reading Winds of Fall.  In the end, he was glad I read Winds instead.  So I am pleased to announce that I have been commissioned to write a screenplay adaption of Alberto Mercado’s book Winds of Fall and to direct the feature. The plan is to complete the script this summer with Al financing the production for either this fall or spring.

Like the funding that came together for Justice Is Mind, the road to the Skype meeting, our screening on the Queen Elizabeth and the journey to bring Winds of Fall to the big screen, you just don’t know where the next opportunity is going to come from.  As the late actor Maximilian Schell said, this is an industry of chances.

One of the original First World posters in 2007. Sales on Amazon have surged over the last few months.