Last Sunday principal photography on Serpentine, The Short Program wrapped! After eight months of writing and two months of pre-production planning, I was more than pleased with the end result. A special thanks to the cast, crew, location partners and sponsors for making this possible. After taking the past week to organize the video and sound files, the hard drive will transfer to our editor on Monday to begin the post-production process. It’s this stage that turns a puzzle into a completed print.

But make no mistake about this process, as an independent filmmaker you are pretty much responsible for everything…even the weather. And while I believe organization and communication are critical to a successful production, it does come down to both diplomacy and flexibility. A film production, whether it’s a short or a feature, is unlike any other type of business. You start by yourself and then suddenly ramp up. For Serpentine that meant over 30 people and three locations (for Justice Is Mind it meant over 200 people and 15 locations). As a screenwriter there is a thrill like none other than watching your screenplay come to life. Isn’t this why we do what we do?

The Assistant Director, played by Vernon Aldershoff, during the FBI conference room scene.

For me this production was both a reunion as well as working with some terrific new people. It started with the FBI conference room scene at The Verve, Crowne Plaza. When Michael Coppola arrived I was immediately reminded of First World where he played a secret service agent. But it was the night before that I wrote an additional new scene for Michael and Vernon Aldershoff (Assistant Director in Serpentine and Henri Miller in Justice Is Mind). Of course, the last thing I wanted to do was to tell the cast and crew about a new scene when we didn’t even shoot the intended one! I waited to see if we were ahead of schedule and we were. It worked out great.

Paul Lussier as sponsor Philip Harrison and Kim Gordon as the President of The American Figure Skating Federation.

It was at Northstar Ice Sports that the word scope came into focus. First, I am beyond thankful to Denise Marco, the board and staff of Northstar for this opportunity. By scope I’m talking about the size of the set. It was about making sure all actors, cameras and crew were properly placed to make sure the scenes worked. For weeks I drew this out from the skating program, to camera and actor placements. What may not have seemed obvious to some would be very obvious in post-production.

Reuniting Kim Gordon and Paul Lussier from Justice Is Mind was a particular goal of mine from the beginning. Their on screen chemistry in Justice was what every director dreams of. So when they both signaled their availability for Serpentine I immediately signed them on to the project. As a director, there is also a comfort factor in terms of direction when working with actors that you know will deliver. In advance of our shooting I forwarded a detailed memo on character and scene development for all actors and crew. As time is a serious commodity on an independent film set, I think it’s best for everyone to understand the entire tone and feel of a scene when they arrive.

As a director I don’t believe in grandiose demonstrations of direction to actors and crew just to prove a point. In my simple view of it all, the most that should happen on set are adjustments. There’s no time to teach someone how to act on set. (Side note: On Justice Is Mind one adjustment I gave to an actress was how to say a particular phrase of profanity. I’ll just say this, it’s an American thing in terms of word emphasis and slang).

Our last day of filming was at a friend’s house. It was a fitting end to the production after coming down from two days of intense work at Northstar and the fact that there was only one line of dialogue. As I said to everyone, these scenes are largely atmospheric and what composers live for. 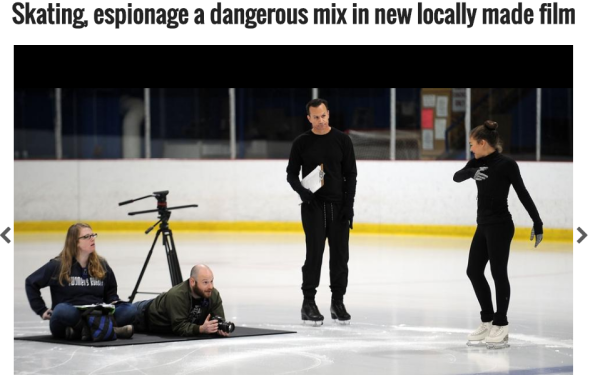 Another highlight of our week was when the MetroWest Daily News interviewed me about Serpentine and sent a photographer to our shoot at Northstar. Not only did they write an excellent article, but created a video as well. You can access both at this link.

Over the next few months I’ll be working on a variety of marketing and promotional efforts as we build towards our February release. During this time look for more stills, behind the scenes images and a trailer.

It’s not all serious on set. Isabella made a cake for Denise!