Not a bad shot of my car!

In all my years being involved in the industry the only “equipment” I’ve purchased was the screenwriting software Final Draft. Is that equipment per se? No, but if you don’t have a solid script all the equipment in the world doesn’t matter. As a filmmaker, I’ve always contracted with those that have their own equipment. We all have own way of navigating this industry and, as I’ve often said, you can’t do everything. Or more precisely, have everything. I believe the best projects come together through a myriad of partnerships where everyone brings something to the table.

But sitting right on the table next to me is the DJI Spark.  While I’ve spoken about the technological improvements in the industry, it truly is incredible where the drone world has gone since we filmed Justice Is Mind in 2012.  Of course drone technology has been around for some time, but in the world of true indie films I was just starting to see it used back then. Now it seems to be de rigueur.

In First Signal there are some particular scenes that call for drone photography. I suppose these scenes could have been done without it, but the point was to open up the visuals after we spend a good amount of time in a conference room. There’s a few other reasons for it as well, but I don’t want to give away the story!

This week was another National Guard training exercise at Joint Base Cape Cod. The exercise was formally called the Massachusetts and New England National Guard HRF and CERFP External Evaluations. Approximately one hundred casualty role players (actors) participated in this exercise. I was brought in as the Casualty Role Player Coordinator. 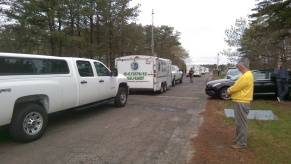 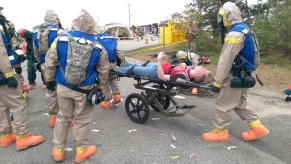 For those that have been wondering what’s involved in these exercises, it’s pretty straight forward. In the event of a disaster (natural or man made), the National Guard is called up. These exercises involve search and rescue scenarios along with medical evaluation, triage and decontamination from radiation exposure. Needless to say, they’re important.

As this has been the third time in a month I’ve participated in one of these exercises, it has been great to work with so many familiar faces.  These exercises reminded me of some of the large scale film productions that come through the region. Just like a film the actors go into wardrobe and makeup and then proceed to “set” or what is called the insertion point of the exercise. If you have a chance to participate in one of these exercises, I highly recommend it. It’s not only a great experience on a variety of levels, but you are also providing a vital service to the preparedness of the National Guard.