Northstar Ice Sports in Westborough, Massachusetts will serve as a primary location for Serpentine.

Setting up a new project like Serpentine is one of details. It starts with the script where you generally write in isolation.  But when you make the decision to produce, that’s when a film takes on an entirely new dimension as it becomes project management with location partners, crew, actors and a variety of other participants.

This past week the location for the ice rink was confirmed along with the actors that will play Suzanne Wilson and her coach Elizabeth Rogers. The latter has a great backstory that I will soon share. Let’s just say that my experience in figure skating has come full circle from the time I first set foot on the ice.

Certain other actors have been confirmed along with crew. Over the next several days the aim is to confirm the rest of the crew while posting for actors and securing the final two locations. My plan is to formally announce the cast, crew and location partners via press release by October 1. Should our plans stay on track, the goal is to start principal photography at the end of October.

Will be posting for Serpentine cast this week.

Like Justice Is Mind, and somewhat with SOS United States, when I started to write Serpentine my aim was always to produce the project. While it certainly helped that I had a background in the sport, when one decides to produce it’s a commitment.  One that starts long before and long after the production wraps. Serpentine started in January 2016 and will continue long into 2017 and well into 2018 and beyond should the feature move forward. There are no shortcuts in this industry.

I’m reminded of this commitment every day with First World, Justice Is Mind and SOS United States. With First World and Justice Is Mind released, there is the regular social media and general promotion. Both are doing extremely well on Amazon Prime in all their territories while SOS United States is still being reviewed by a production company (one that regularly produces). 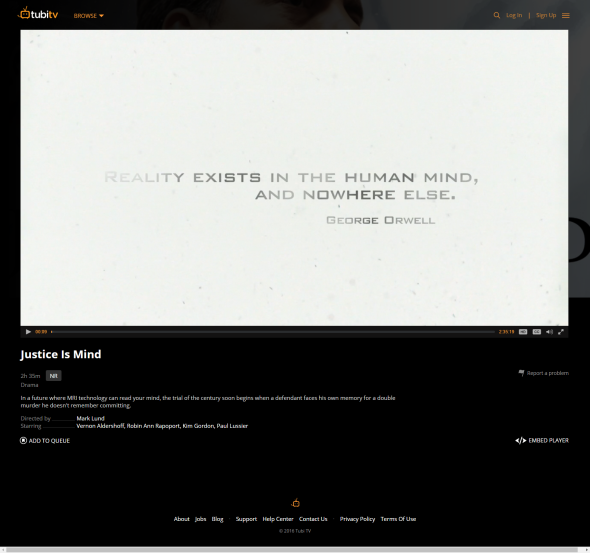 Justice Is Mind arrives on TubiTV!

Filmmaking is not like the old Ron Popeil motto of “Set it, and forget it!” once a film is completed. Promotion, in the age of VOD, is ongoing. Take this week for example, Justice Is Mind just arrived on TubiTV. As all of us associated with Justice Is Mind are reminded, four years ago this month we were filming and yet the project continues to reach new audiences through platforms like TubiTV. Platforms that didn’t exist when we were filming Justice Is Mind.

TubiTV reminds me of Hulu in its early days. It’s an advertiser supported VOD platform that doesn’t require a monthly or annual membership like Netflix (or Amazon for Prime). What’s important in the world of film distribution is to give audiences as many choices as possible on how, when and where they want to watch a film. Today, three years after release, Justice Is Mind can be watched on your TV, computer, tablet, smartphone and an array of other devices and platforms.

Speaking of platforms of a different nature, it looks like after twenty years I’ll need to get my skating legs underneath me again for Serpentine.